Connecticut, USA: After 1984 Sikh Genocide Memorial which was removed by Otis Library due to intense pressure of Indian Govt. last year while Prime Minister Of India Narinder Modi was on his tour to America is slowly making its way to hearts of Thousands of Connecticut Residents.

First memorial was moved to Connecticut College in New London from Norwich Otis Library where Sikh Community leaders was invited to give presentations about this topic.Many college students also wrote articles about history of Sikh genocide as well. 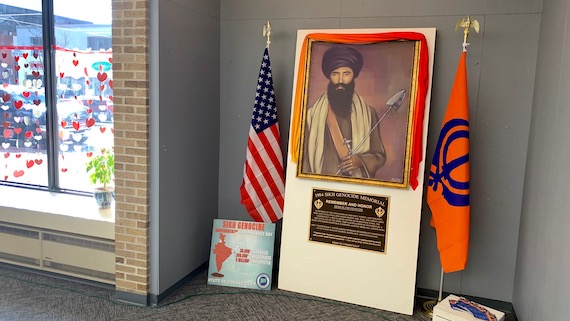 Then Memorial was Moved to Wauregan Gallery for a month of November which is commemorated by Sikhs as Sikh Genocide Awareness Month.
Dan Topalis Director of Wauregan Gallery welcomed the memorial and was upset on Indian Govt. interference in his community.

Now Dan Paquette Director of Willimantic Public Library has Welcomed the Memorial and said “I am excited about it”.

Swaranjit Singh Khalsa Connecticut Sikh Community leader said “I hope to educate my fellow American about this lost chapter of History with the intention to Ease some of the pain that Sikhs still hold in bottom of their Heart”. 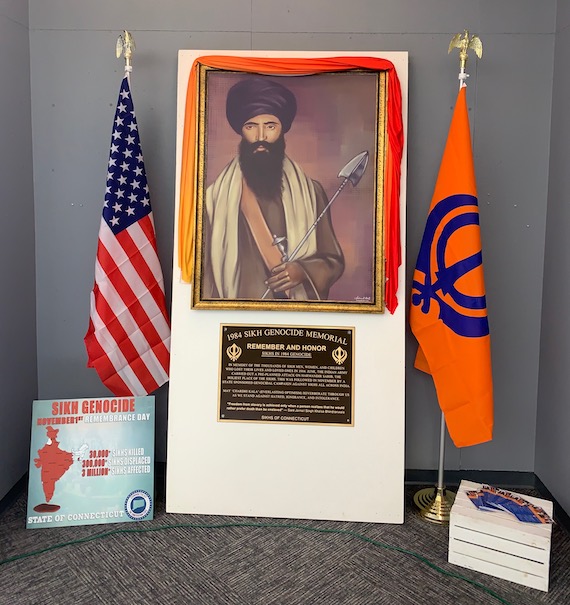 Swaranjit Singh Khalsa said “Goal of this Memorial is to Keep the History Alive and Remind the Mankind that we should Recognize All Human Race as One which is one of the core message of “Sikhism” to mankind.”

He said “This is Reminder to Global Society that it’s very important to raise our voice against Injustice no matter where it happens and share powerful message of Oneness and Love to maintain World Peace.”

This Memorial Features the Historical events of 1984 the way it happened and give opportunity to Sikhs all around the globe to share their story in their narrative.

Memorial also Features American Flag along with Sikh Flag which represent Sikhs commitment towards America and to achieve their dream to create world where everyone is treated equally.

The Symbol inside Sikh Flag is called “Khanda” which is symbol for spiritually and power.This Flag is Hoisted outside every Sikh place of worship all around the globe to represents that everyone is invited to attend the service and to join for community meal despite of their color,caste,creed,religion,orientation etc.

Memorial also features Portrait of “Sant Jarnail Singh Khalsa Bhindranwale” who was leading the Civil Rights Movements in 1980’s in Punjab and trying to make people aware on how their State and Human rights have been exploited by India.

Sikh Community of Connecticut is very glad that State of Connecticut Showed their solidarity with their marginalized and minority community by passing a law to Recognize Nov 1st Every year as “Sikh Genocide Remembrance Day” and also applaud the efforts of Governor Lamont who Recognized Month of June as “Sikh Memorial Month” to pay homage to Sikh Martyrs who died during 1984 to protect the Sikh places of worship.

Sikhs are still struggling for their state rights in Indian occupied Punjab and Justice has been denied as perpetrators of Sikh Genocide are still not been punished even after 35 years.

Kuljit Singh Resident of Willamantic said “I am glad to see Americans supporting the right thing and welcoming education about Sikh Genocide”.

Manmohan Singh Bharara who was instrumental in establishment of all major Gurudwaras in Connecticut and currently serving as president of Hamden Gurudwara said “We are victims of Sikh Genocide and India should take responsibility for its crimes against Humanity.”

Bakshish Singh who serves as treasurer in Norwalk Gurudwara Said “We not just have Sikhs who attend our service but also Hindus and their is no tension between communities.The Word Genocide take the blame from communities and make Government accountable and that’s why Indian Govt. don’t like that, but that’s not our problem as we as survivor of genocide just want history to be written the way it happened.

On Interview call Swaranjit Singh Khalsa said “Soon World Sikh Parliament will also release Sikh Manifesto and recognition of Sikh Genocide is one of the point we want our U.S Representatives and Senators to endorse if they seek our support”.

Sikh Community Hope that this time Indian Government and it’s agencies including some registered Non- Profit organizations that work under India Agenda will not bother or threat Willamantic Library and it’s Director with their false narrative.

Sikh hope that this time India and its Agents won’t try to project violence of 1984 as Communal tension between Hindus and Sikhs because, it Never Was and Never will be.

Local Sikh Community even enlightened Historical fact that History is witness that Sikh Guru “Guru Teg Bahadar Ji” gave his own life to protect Hindu religion and stand for righteousness and Hindu Community recognize this fact and that’s why even attend our services in our Sikh places of worship.