2020 Sikh Referendum Android App Jitters Punjab CM; All You Need To Know About This App

A statement issued by Punjab CMO says: “[s]eriously perturbed over reports of the launch of a secessionist, anti-India app by Google, Punjab Chief Minister Captain Amarinder Singh on Friday directed his officers to take up the matter with the IT giant, even as he urged the Centre to direct the company to take down the controversial app immediately” (sic).

The Punjab CMO statement says: “[t]he state government has taken up the issue with Google, said an official spokesperson, adding that, acting on the Chief Minister’s directives, DGP Punjab Dinkar Gupta is also coordinating with the central security agencies to tackle the threat triggered by the launch of the ‘2020 Sikh Referendum’ App, just ahead of the opening of the Kartarpur Corridor”. (sic)

The App, freely available for download on Google Play, is clearly aimed at pushing the ISI agenda of dividing the Sikh community amid the 550th Prakash Purb celebrations of Sri Guru Nanak Dev ji, said the Chief Minister, demanding that the app be immediately taken off. (sic)

What’s Name of App and Where is it Available:

The name of App is “2020 Sikh Referendum”. It is an android app and its available on Google Play Store.

What ‘About this app’ Says:

‘About this app’ is a section on Google play store page of any app which shows information provided by the app developers for introducing their app/s.

‘About this app’ section of ‘Sikh Referendum 2020’ app consists of a single line (written twice) which reads: 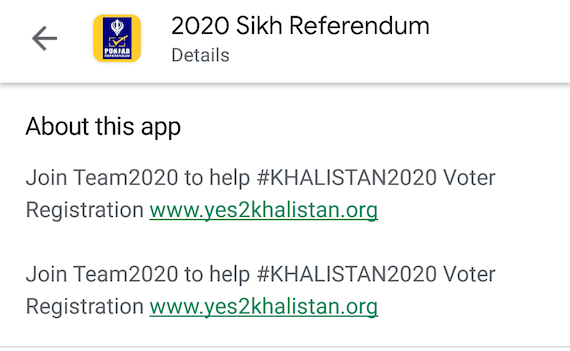 A screenshot showing About this app section

Who Has Launched The App? ICETECH, Not Google: 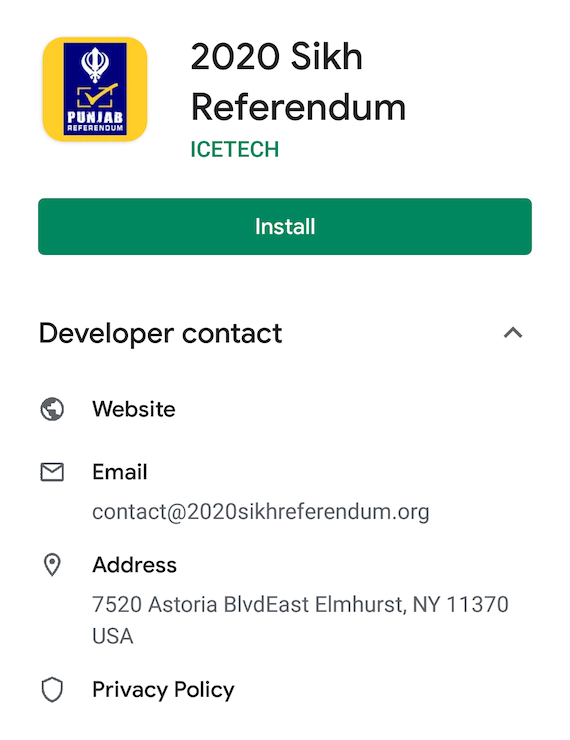 When Was App Released?:

Punjab CM has maintained that the App is released just ahead of inauguration of Kartarpur Sahib corridor.

App info section on App’s Google Play Store Page shows that the app was released 14 February 2019. Its current version is shown as 3.001 which was updated on 26 February 2019.

What’s New section of the app’s Google Play Store also shows that it was last updated on 26 February 2019.

A screenshot showing app’s release date and other related details

Noticed Only After SFJ Announced Launch:

It seems that the release of app was noticed only after the Sikhs For Justice announced the launch of app a day or so ago.

How Many People Have Downloaded The App:

What App Ratings and Reviews Reveal?

App’s Google Play Store ratings were at 1* (1 out of 5 stars) when checked the Sikh Siyasat News (SSN). It is notable that 1 is the least rating.

Interestingly Google Play Store users who have rated the app with worst rating have Hindu names. Besides rating the app so these users have posted negatively worded comments.

An analysis of recent comments and ratings on this App’s page revealed that user profiles with Sikh names have started rating the app with best 5* (5 out of 5 stars) ratings. These users are leaving positively worded comments in favour of app or the so-termed ‘Referendum 2020’.

This App is posted under Events category on Google Play Store, where its stats are growing fast. It seems that opposition from Indian media, politicians like Punjab CM Amarinder Singh and pro-India online activists has helped the app stats and download count to grow faster.

What This App is About:

According to claims by SFJ, as the analysis of App content reveals, the App seems to have a functionality using which people can register to cast their votes for Sikhs For Justice (SFJ)’s so-termed referendum 2020 move. According to SFJ ‘Referendum 2020’ would be a non-binding referendum for independence of Punjab.