London: After Facebook mass censored Sikh posts during #SikhGenocide remembrance movements last week, a meeting was held between dozens of Sikh organisations in the United Kingdom.

The representatives unanimously agreed that the censorship, on this occasion largely carried out on Facebook but also seen on Instagram and Twitter, was centered on stifling anything linked to the Khalistan and likely was done at the behest of the Indian state. 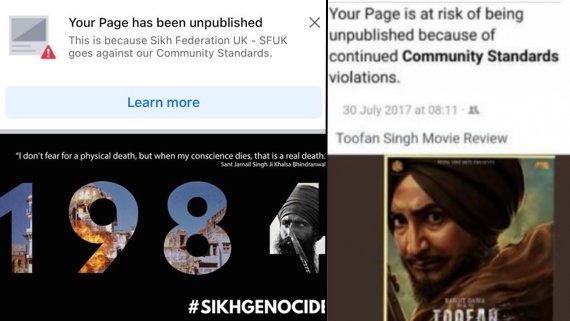 These thoughts echo those of other international and North American Sikh organisations, who spoke with Facebook and Instagram senior executives in June, after the hashtag #Sikh was blocked, also during annual #SikhGenocide awareness week campaigns. R

Given the continued censorship, which also impacts posts on Sikh history, the targeting of Sikh females by grooming gangs and even Kirtan, an open letter to Facebook – signed by 30 different Sikh organisations (as of 13 November 2020) – has been released with the aim of prompting senior executives of the social media giants to live up to their self-proclaimed commitment to “free expression” on their platforms.

The censorship largely focused on posts related to the Sikh struggle for Khalistan, but also impacted posts on Sikh history, activism against sexual grooming that targets Sikhs, and posts relating to Kirtan (Sikh devotional singing). This mass censorship targeted a large number of accounts from individuals to Sikh organisations and Gurdwareh, with posts being deleted as far back as 2010.

This was the second time this year that Sikh social media posts were censored en masse, following the blocking of the hashtag #Sikh on Instagram in June this year, also during a period of Sikh genocide remembrance.

From analysis of posts targeted for removal a clear pattern is visible which shows most posts were targeted based on use of the following key words: Khalistan, Sukhdev Singh Babbar, Gurbachan Singh Manochal, Avtar Singh Brahma, Jagraj Singh Toofan, and Jujaroo Jathebandia (Sikh military units) such as the Babbar Khalsa, Khalistan Liberation Force, and the Khalistan Commando Force.

From the simultaneous, widespread, and targeted removal of content it is clear that this recent wave of censorship has come from the Indian state which has long opposed any form of revolutionary Sikh self-expression centred on Sikh sovereignty, adopting policies of genocide to violently annihilate any Sikh resistance. Khalistan, as a term and as a movement, has been demonised in Indian public discourse to the extent that in India Khalistan has become synonymous with “terrorism”. This image is the product of decades of fascist Indian rhetoric and propaganda that has been used to justify the state’s torture, enforced disappearances, mass rapes, arbitrary detention and genocide of Sikhs.

The November 3rd wave of censorship coincided with the Indian foreign minister’s arrival in the UK, which was preceded by news coverage in Indian media that highlighted the Indian State’s suppressive laws targeting online speech. Under Article 69A of the “Information Technology Act“, Indian agencies have been empowered “to monitor, intercept, and decrypt any information generated, received transmitted or stored in any computer“. This law has been used to stifle dissent and block online content that challenges the “sovereignty and integrity of India“. These new laws are a modern rendering of the oppressive colonial era logic that makes sedition and political dissent a crime.

India today maintains that Sikhs are the aggressors and that only a “small minority” of Sikhs demand Khalistan. Yet Indian laws, and the public discourse that was used to justify them, targets all Sikhs and expressions of Sikhi itself.

The signatories to this letter stand in solidarity against any censorship targeting the Sikh community and urge Facebook to become part of the conversation – specifically on Khalistan – that is being censored. We expect immediate response detailing steps towards addressing this censorship.

We urge Sikhs and allies reading this letter to share it widely and connect with the Sikh grassroots to build solidarity that exists outside frameworks of censorship.

[With] the Cauldron (commensality), the Sword, [and the praxis] of Sikh Victory, [with] Respect/Support for the elderly and ill, The Panth (way/community/nation) will forever prosper.