Chandigarh: The issue of controversial Satluj Yamuna Link (SYL) canal is being once again used as a tool by various political parties to blame each other.

The issue recently came to fore after the Supreme Court accepted a petition by the Haryana government for an early hearing on the issue, on which Presidential Reference was pending before the five-member Bench. 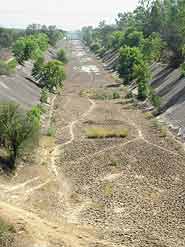 With traditional SAD (Badal) and Congress being already in the political blame-game, the new-comer Aam Aadmi Party (AAP) is also trying to make some strokes against the ruling party on this issue.

With the BJP led Narendra Modi government filing an affidavit in the Supreme Court of India “favoring an early completion of the SYL canal”, the Aam Aadmi Party has accused the ruling Badal family of adopting double standards on the issue.

AAP leaders argue that Punjab CM Parkash Singh Badal had been saying that the state had “not a drop to share”, his daughter-in-law and Union Minister Harsimrat Kaur stood party to the Narendra Modi government’s stand against the state.

Party’s Sanguru MP Bhagwant Mann said that if the Badals were serious on protecting the interests of the people of Punjab, Harsimrat Badal should have stood up against the Centre’s affidavit in the SCI advocating the construction of the SYL canal.