Fatehgarh Sahib/ Bassi Pathana: As per a press release by the Aam Aadmi Party (AAP) acute shortage of affordable houses, inconvenience in issuance of SC certificates and improper implementation of welfare schemes for dalits emerged as key issues during the AAP’s dialogue with Dalits held here to finalise the Dalit specific poll manifesto.

While addressing the gathering, Kanwar Sandhu said that AAP is the only political party in the country, which initiates dialogue with the stake holders to identify the issues to be incorporated in Poll Manifesto to set the agenda of upcoming State Government.

Chander Suta Dogra made a presentation on the Power Scenario in Punjab and explained how people of the state are being cheated by the Akalis in the name of making Punjab as Power Surplus State. 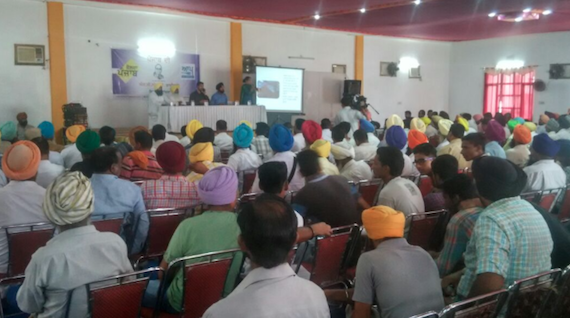 A view of gathering during AAP’s program in Bassi Pathana

Sandhu said that earlier this Dialogue was held with different sections of the society and now it is the second round of Dialogue before setting up the agenda of AAP’s Government. Within three months of formation of AAP’s Govt, manure squeezing would be banned in Punjab, Sandhu announced.

“Dialogue with Dalits to identify the issues pertaining to them is very significant, as most of the political parties do not do anything for the welfare of downtrodden, except treating them as mere Vote Bank”, Sandhu said adding that even after 70 years of independence Dalits are still being suppressed by politicians.

One of the participants, Paramjit Singh Sekha complained of the poor standard of government schools, where leave apart the other infrastructure, even teachers are not deployed to impart education to children, most of them belong to dalit families.

Sandhu assured that on the pattern of Delhi, where Government Schools have been upgraded to match the standard of private schools, in Punjab also quality education would be imparted in Government schools.

“Privatisation of education will be stopped in AAP’s regime and to provide better medical facilities to poor, Mohalla/village clinics will be opened in entire state”, Sandhu said.

Gurmukh Singh, a dalit, said that although several reserved vacancies in Government Departments are lying vacant, but State Government deliberately delaying the clear the backlog to deny dalits their due rights.

On this, Sandhu said that clearance of backlog would be the priority of AAP’s Government and it has been noticed that prevailing mass-scale corruption is route cause of every sin of Punjab and AAP would adopt a zero-tolerance approach against corruption.

Dalits complained of inordinate delay in distribution of amount under Shagun Scheme and even demanded increase in the shagun amount of Rs 15,000. Even lack of affordable houses, poor plight of safai karamcharis were other issues, which were highlighted by the gathering of dalits.

Delhi MLA, Jarnail Singh while concluding the session said that in Delhi too, AAP initiated dialogue with people to set the agenda of Delhi Government and accordingly all the promises made in the Poll Manifesto are being fulfilled one by one.