UNION CITY, CA: Explaining why she will be the keynote speaker at the March 24 book launch of Captivating the Simple-Hearted, sociology professor Indira Prahst states, “The book probes what it means to be Sikh and brings important questions of Sikh resistance into the forefront with a wide spectrum of historical accounts that rupture hegemonic discourses.”

Captivating the Simple-Hearted: A Struggle for Human Dignity, written by Pieter Friedrich and Bhajan Singh, is being welcomed as a fresh perspective on the origins of the Sikh people. Describing its unique angle, Naindeep Singh, the founder of Jakara Movement, says, “While today’s rendering of Sikh history focuses on privileged groups and their historical outcomes, Friedrich and Singh attempt to re-look at old sources to forge new readings, interpretations, and underline the importance of the Guru’s message to those that have been most oppressed, but still raise the sword of eternal optimism (chardikala).” 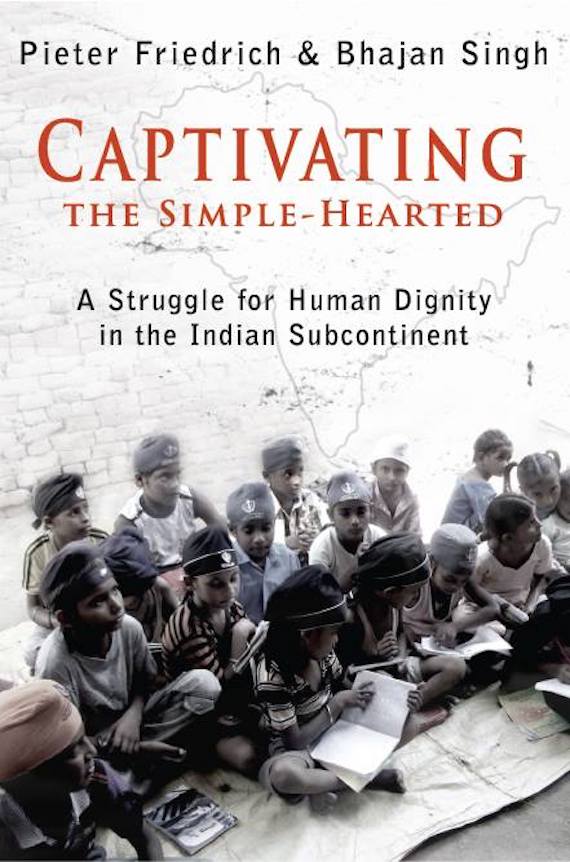 Captivating the Simple-Hearted: A Struggle for Human Dignity in the Indian Subcontinent

“Captivating the Simple-Hearted is itself captivating in its narrative flow,” says Dr. Rajkumar Hans, a former professor of history at Baroda University. Referring those historically treated as untouchables (Dalits) as well as tribals (Adivasis), who are today often collectively referred to as Mulnivasi, he writes, “Looking at a long history of what Babasaheb Ambedkar called ‘revolutions and counter-revolutions’ while focusing on the Mulnivasi, the work is a valuable, crisp reinterpretation of the Sikh Revolution.” He also believes it offers a challenge to the supremacist Hindu nationalist philosophy known as Hindutva, writing, “This little book has a potential of forging solidarity among the victims of horrendous Hindutva majoritarianism for a future egalitarian society as it is solidly based on the rich heritage of emancipatory movements, Sikhism in particular.”

Meanwhile, the book’s portrayal of opposition to the caste system as central to the rise of the Sikhs is drawing attention from Dr. Manisha Bangar, who serves as National Vice-President of All India Backward And Minority Communities Employees Federation (BAMCEF). “The authors compellingly argue for the suffering millions to derive inspiration from the Sikh Revolution which envisioned India as a modern, casteless, classless society with equitable mobility and which galvanized the masses,” comments Bangar. Dr. Harpreet Singh, a professor of South Asian Traditions at Harvard University, offers a similar opinion. He writes, “Captivating is a timely work that interrogates the structure of caste and its impact on the marginalized peoples of South Asia. The work weaves a rich brocade of history, ideology, and praxis that has been put to use by the elite at the apex of the caste pyramid to subjugate hundreds of millions of people in one of the most oppressive nations on earth.”

Dr. Vislavath Rajunayak is a visiting scholar at University of California – Berkeley who specializes in issues of tribal history and traditions. He believes the book demonstrates that Sikhism was historically embraced by the “lowest of the low” in Indian society, remarking, “If you read Captivating the Simple-Hearted, you will be amazed to know about the Gurus’ wonderful proclivity towards the Mulnivasi.” He boldly declares, “Anyone who wants freedom in this world should partake of this history to learn about facing today’s challenges.” A professor of ethnic studies at Sacramento State University, Dr. Amrik Singh draws similar conclusions, explaining, “This book blends the vision of Guru Granth Sahib and the Mulnivasi history into one goal given by Guru Nanak when he said the Guru’s blessing shall pour forth where the lowest of the low are cared for and protected.”

Reviewers are also praising the book for telling the history of the oppressed Mulnivasi from their own perspective rather than relying on the narratives of “court historians.” Thus, anthropologist Dr. Shrikant Borkar states, “Captivating the Simple-Hearted remains a necessary read on aboriginal history. This monograph subsumes one of the historical attempts of indigenous people to write their own history of defiance and subversion for the sake of upholding human values and egalitarian principles rather than power, hegemony, or supremacy.” In agreement, Col. G. B. Singh (U.S. Army, retired) calls Captivating “an Alternate History of its kind or the Other Side of the Story.” Singh, who is the author of two books examining “the other side” of Mohandas Gandhi, adds, “This is a monumental, groundbreaking, intellectual book based upon accurate primary sources with historical rigors applied and then properly analyzed right to the core of ground realities.”

Suggesting the book offers a broad historical perspective, Dr. Amrik Singh comments, “Captivating the Simple-Hearted is a sincere scholarly attempt to examine the course of the historical journey of the Indian subcontinent.” The authors welcome such reviews. “We wanted to provide readers insight into why the development of the Sikh people in Northern India was such a catalytic event for the course of the history of the entire subcontinent,” comments Pieter Friedrich, a California-based writer. Bhajan Singh, a community activist, remarks, “In service to the humanity of this planet, I hope my humble effort will be a beacon of learning for all the world’s oppressed.”

Captivating the Simple-Hearted: A Struggle for Human Dignity in the Indian Subcontinent will be formally released during a book launch on Saturday, March 24 from 4pm-7pm at Crowne Plaza, 32083 Alvarado-Niles Rd., Union City, CA 94587.

Speakers at the event will include Professor Indira Prahst (Langara College, Vancouver), Bibi Paramjit Kaur Khalra (Khalra Mission Organisation), Dr. Amrik Singh, Naindeep Singh, Suthamalli Ganga (Ambedkar Association of North America), and Col. G. B. Singh. There is no cost for the event, but books will be available for sale. Snacks and tea will be served.

Note: Captivating the Simple-Hearted is available to order by emailing pieter[at]sovstar[dot]com.