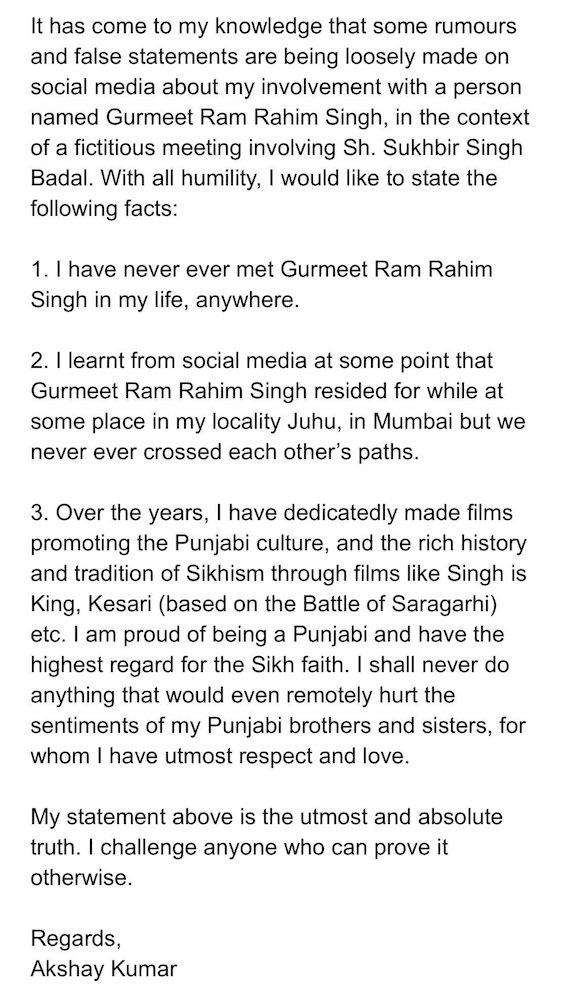 In first point, in his statement, the actor said that he never ever met Gurmeet Ram Rahim in his life any where.

The second point, in his statement refers to social media talking and simply tried to add weight to his earlier point that he never met Gurmeet Ram Rahim.

In third point he offered an explanation that he was making films to “promote” Punjabi culture and rich history and tradition of Sikhi.

Even a simple reading of his statement shows that Akshay Kumar has evaded the core issue i.e. mediating between the Badals and the DSS to break the said a deal. At the most he said that he never ever met Gurmeet Ram Rahim personally. In his statement he did not make mentions of SIT summons or media reports about such summons.

It is notable that the Justice Ranjit Singh Commission had noted in its report that some witnessed had deposed regarding such a meeting where the issue of so-called pardon for the Dera Sauda Sirsa chief was bargained as an edict was issued by Akal Takht Sahib against him in 2007 after he had attempted to personify himself as 10th Sikh Guru, Guru Gobind Singh Ji. Personification of Sikh Gurus is strictly prohibited as per the Sikh tradition.