Egypt: A Cairo court has sentenced three Al Jazeera journalists to three years in jail after finding them guilty of “aiding a terrorist organisation”. 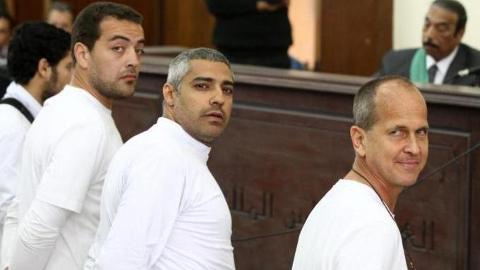 Mohamed was sentenced to an additional six months for possession of a spent bullet casing.

In a statement, which reads below, Al Jazeera condemned the court decision:-

Our colleagues Baher Mohamed and Mohamed Fahmy will now have to return to prison, and Peter Greste is sentenced in absentia.”

The whole case has been heavily politicized and has not been conducted in a free and fair manner. There is no evidence proving that our colleagues in any way fabricated news or aided and abetted terrorist organisations and at no point during the long drawn out retrial did any of the unfounded allegations stand up to scrutiny.

A report issued by a technical committee assigned by the court in Egypt contradicted the accusations made by the public prosecutor and stated in its report that the seized videos were not fabricated,. Baher, Peter and Mohamed have been sentenced despite the fact that not a shred of evidence was found to support the extraordinary and false charges against them.

“Today’s verdict is yet another deliberate attack on press freedom. It is a dark day for the Egyptian judiciary; rather than defend liberties and a free and fair media they have compromised their independence for political reasons.”

“Al Jazeera Media Network will continue to call for their freedom and an end to the ordeal for Baher, Peter and Mohamed and the six Al Jazeera staff who were sentenced in absentia”.

“The support shown for Baher, Peter and Mohamed has been loud and unified and has come from every corner of the world, from world leaders, journalists, human rights organisations and the general public.

Alongside demanding the release of our colleagues, Al Jazeera calls on every one to continue the fight for the freedom of speech, for the right of people to be informed and for the right of journalists around the world to be able to do their job.

“We will not rest until Baher, Peter, Mohamed and the six Al Jazeera staff sentenced in absentia are freed and formally and definitively acquitted from the trumped up charges against them.”

Journalism is not a crime.