The Campus Front activists were raising slogans of ‘Azaadi’.

A release by Campus Front alleges that Swadeshi Jagaran Manch workers, who were sloganeering against the JNU Students Union President Kanhaiya Kumar on the other side, jumped over the barricades and assaulted the Campus Front members.

“It is to be noted that the women members were in the front row of the attackers whereas the men assaulted from behind leaving no room for the Campus Front members to return with like for like to the Saffron goons. The police was a mute spectator to the sudden attack by the Sangh Parivar [activists]’, the statement reads further. 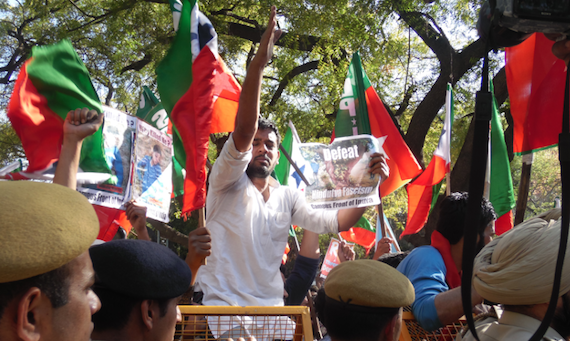 Campus Front National President P Abdul Nazar said, the assaulting women were abusing us, ready with sticks, attacked us as if they were prepared for the fight. He said, we were protesting peacefully demanding justice for the victims of Jhakhand cattle traders, but all of a sudden the SJM workers assaulted us, of whom women were at front and the men members attacked us front behind. Nazar demanded for stringent action against the Swadeshi Jagaran Manch workers for assaulting the students.

SDPI Vice President Adv. Sharfuddin demanded arrest of Savdeshi Jagran Manch activists. He said that SJM activists should be arrested forthwith as they attacked the students who were protesting peacefully.

Inaction against such felons will only leave the culprits free to commit further hateful crimes against innocents, said Adv. Sharfuddin, while addressing the media persons.

Popular Front National Executive Council Member Arif Mohammed said, it is since the inception of Modi regime that such criminals are enjoying impunity after (allegedly) committing “rampant goondaism”.

He said that assaults by Sangh Parivar workers on peaceful protestors has become common across the country. Right from Cabinet Ministers to the low level cadres of the Sangh Parivar are indulged either delivering hatred speeches or attacking innocents. It is sad state of affairs that our Prime Minister doesn’t walk the talk and the outlaws, as we see Swadeshi Jagaran Manch workers assaulted the protesting students, injuring a dozen of them, enjoy impunity under the patronage of their political bosses.

Women India Movement Central Committee Member Shaheen Kausar said, today we are here to condemn the heinous act by the Swadeshi Jagaran Manch workers of assault on our members and demand immediate action against the culprits. It is a joint protest organized by several socio-political organizations. She said, innocent Jharkhand cattle traders demand justice and those protesting for their justice were beaten by Sangh Parivar goondas must be tried in the court of law.

Representatives of several organizations participated in the joint protest.