Chandigarh: The ‘pro-hindutva’ Bhartiya Janata Party (BJP) whilst making in-roads in the North East region of the Indian sub-continent once considered as cocooned from the evils of majoritarian politics has managed to ousted Communist Party of India Marxist (CPM) from the state of Tripura and under its alliance partner Nationalist Democratic Progressive Party (NDPP) is wining in Nagaland as well. 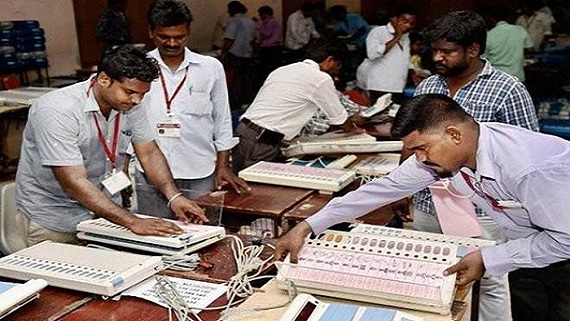 By 5: 30 PM, the BJP had won 30 seats and was leading on 5 seats in Tripura’s 59 member legislative assembly. BJP’s Ram Madhav whilst briefing the media over the current trend of counting in Nagaland said that his party, along with ally (NDPP), was in a good position as they have jointly won 15 seats and were trending ahead on 12 seats out of 56 seat Naga assembly.

Moreover, in Meghalaya the incumbent Congress party has been on the lead from the very beginning of the counting of votes. By 5 : 30 PM, the Congress had won 20 seats and was ahead on 1 seats. Thou the BJP was able to win only 2 seats. But its regional partners in the northeast Democratic Alliance like the United Democratic Party (UDP) has won 6 seats, where as the National People’s Party (NPP) managed to secure 18 seats and is leading on 1 thus trailing behind Congress from 2 seats.

While the Congress has been ruling Meghalaya for 10 years, the Naga People’s Front has been in power in Nagaland since 2003, except for a three-month period of President’s rule in 2008. Tripura went to polls on February 18 and elections were held in Nagaland and Meghalaya on February 27, notes Hindustan Times (HT) in its report.