Amid international media fallout after German Ambassador Walter Lindner’s 17 July 2019 visit to the headquarters of the RSS — a volunteer organization that has enshrined Nazi and Italian fascist ideology — calls are increasing for Lindner to resign. In addition to its fascist roots dating to 1925, the RSS is seen as highly controversial due to repeated allegations in recent years of the organization stoking violence against India’s Muslim and Christian minorities. 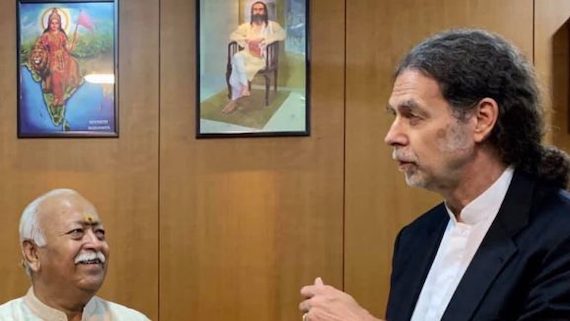 In India, Lindner’s visit is seen as highly unusual as no other ambassadors of other nations have made individual visits to the RSS headquarters or held one-on-one meetings with its controversial leader. Pressure is now mounting for Berlin to recall its controversial ambassador as over 2500 people have signed an online petition calling for Lindner’s resignation. The seasoned diplomat, who has served as an ambassador on three previous occasions, was appointed to his post in New Delhi in April.

The RSS, often referred to as a paramilitary, is infamous for its members dressing in uniforms which strongly resemble those worn by members of the Hitler Youth. It was founded in 1925, the same year that the Nazi party was reformulated with Hitler as its leader. In addition to drawing inspiration from the Nazis, the RSS modeled itself after Mussolini’s fascist movement in Italy.

Germany is also still struggling to exorcise the spectre of Nazi Germany. On 20 July, Foreign Minister Heiko Maas warned that Germany must “tackle its far-right problem.” Referring to the 2 June murder of Christian Democratic Union politician Walter Luebcke by a neo-Nazi, Maas stated, “For the first time since 1945, a German politician has become the victim of a right-wing political murder.” Two weeks later, Germany’s domestic intelligence agency reported that there are up to 13,000 violent right-wing extremists in the country. Meanwhile, the ultranationalist Alternative for Germany party has gained over 14% of the seats in the German parliament.

The petition calling for Ambassador Lindner’s resignation notes that 33-year RSS leader M.S. Golwalkar — who served from 1940 to 1973 — “wrote glowingly in support of Nazi racial policy.” Golwalkar described those who refuse to “glorify the Hindu Race and Nation” as “traitors” and called it treason for an Indian to convert away from Hinduism. In 1939, he further wrote, “To keep up the purity of the race and its culture, Germany shocked the world by her purging the country of the Semitic races — the Jews. Race pride at its highest has been manifested here.” He called this “a good lesson for us in Hindustan to learn and profit by.”

The RSS has been repeatedly accused of instigating violence. It has been banned several times, the first time following the assassination of M.K. Gandhi by a former RSS member. In 2002, Human Rights Watch named the RSS and its subsidiaries as the groups responsible for an anti-Muslim pogrom that killed 2,000 in the Indian state of Gujarat. In 2012, Swami Aseemanand, a full-time RSS worker, confessed to orchestrating several terrorist bombings which claimed hundreds of lives from 2006 to 2008. In its June 2019 report, the United States Commission on International Religious Freedom warned that the RSS’s agenda “to alienate non-Hindus or lower-caste Hindus is a significant contributor to the rise of religious violence and persecution.”