Amritsar: Lashing out at Akali-turned-Congressman Manpreet Badal for saying that 80 percent of the total Sikh population including him, were Sehajdharis, the Dal Khalsa said he and his new boss Captain Amrinder Singh were educated illiterates who have no knowledge about the distinction between Patits and Sehajdharis.

The office bearers of the organization that met to take stock of the religio-political situation in Punjab questioned the basic knowledge of Congress leaders including Amrinder, Ravneet Bittu, Manpreet and AAP MP Bhagwant Mann about Sikh Rehat Maryada and Sikh Gurdwara Act (1925). 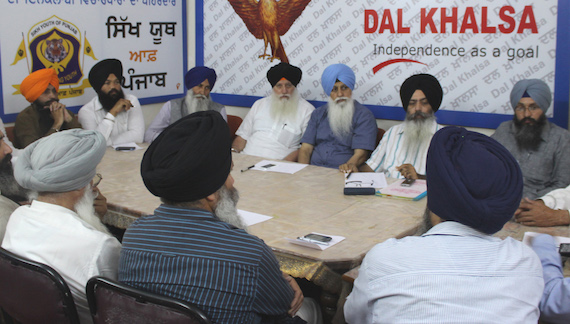 Briefing the media, party spokesperson Kanwar Pal Singh said such politicians were deliberately blurring the difference between Patits and Sehajdharis with an eye on Patit votes. The Congress has been dabbling in the Sikh religious affairs by creating dummy fronts and Sehajdhari Sikh Front is its latest creation.

Quoting the Sikh Gurdwara Act he said it defines Sahjdhari under clause 10-A as a person who is not a Patit beside three other parameters. In the sub-clause it explains the meaning of Patit as a Keshadhari Sikh who trims or shaves his beard or Kesha’s or after taking Amrit commits any one or more of the four Kurahit’s.

Going by what Sikh Gurdwara Act says, there is no doubt left that neither Manpreet nor Ravneet nor Ranu nor Bhagwant Mann are Sehajdhari’s. They falls under the definition of Patit Sikhs.

As per the Act, Patit Sikhs are denied the right to vote since the adoption of the Act in 1925. However, neither religiously nor legally, they are excluded from the Sikh fold. He wondered why these politicians were raising hue and cry.

Referring to the statement of Congressmen that 70- 80 percent of Sikhs are apostates, Dal Khalsa activist termed it over exaggeration. He questioned the parameters used by such politicians to gauge the percentage of drug addicts or the number of apostates in present-day Punjab.

Those who were making sinister noises that we had excluded a large section of the community (Patits) from Sikhism were highly mistaken. Dal Khalsa activists said no one can exclude or oust a person from the Sikh fold who is born in a Sikh family until and unless he or she is declared a tankhaiya. “Patit Sikhs are very much part of the Panth, they are our sons and brothers and no one can segregate them. At the same time, it’s their responsibility also to be true to their religious identity, symbols and tenets.

The meet was of the opinion that the decision to do away with the voting rights of Sehajdharis stems from the collective wisdom of the community after it realized that non-Sikhs were penetrating or interfering into Sikh religious affairs under the garb of Sehajdharis.

They clarified that the passage of bill in both the houses and the on-going court case was between Sikhs and Sehajdharis and it had nothing to do with the Patit Sikhs, who have been denied voting rights under the Sikh Gurdwara Act 1925 from the day first.