Centre’s Notification Over Chandigarh is Unjustified and Discriminatory Against Punjab: Punjab Manch

Chandigarh: A deputation of Punjab Manch led by Dr. Dharamvira Gandhi, Member Parliament on Thursday (Oct. 4) met the Governor of Punjab Shri V.P. Singh Badnore and submitted a memorandum in the name of the President of India regarding Chandigarh as the capital of Punjab. [READ FULL TEXT OF MEMORANDUM in PUNJABI/GURMUKHI Below] 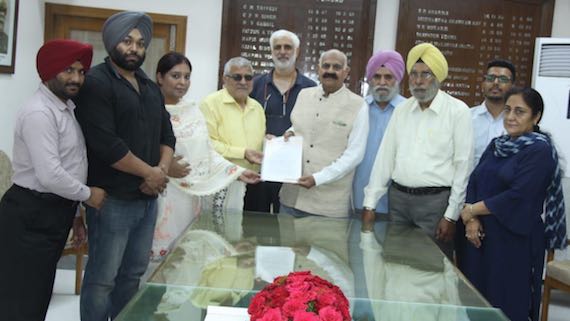 In its memorendum addressed to the President of India, Punjab Manch demanded that at the time of reorganisation of Punjab, Chandigarh as a capital of Punjab was practically taken away from the Punjab and was declared as a Union Territory for utilisation as a joint capital of two states i.e. Punjab and Haryana. As a result of which the administrative control of Chandigarh largely went into the hands of Centre or its representatives. The remaining small portion of the administration was filled on deputation basis from Punjab and Haryana in the ratio of 60:40. With this, the Punjabi language lost its status as administrative language in its capital Chandigarh and the central government surreptitiously eroded administrative powers which were in the interest of Punjab and gradually changed the social structure of Chandigarh.

Dr. Gandhi said that the Punjab Manch is of the opinion that the capital of a state or a country is not simply a city or a geographical entity, it represents the people; culturally and socially and is a geographical and administrative unit of the body of the people inhabiting it.

Patiala MP said the new notification of 25th September by the Union Minister of Home Affairs under section 309 acquiring itself right to fill the vacant posts in Chandigarh administration is an injustice and big attack on rights of Punjab. It is for the first time that Chandigarh has been placed in the same status with other Union territories under the guise of creating a ‘Service’ for ‘National Capital territory Delhi, Andaman and Nicobar, Lakshadweep, Daman and Diu, Dadra and Nagar haveli, and Chandigarh Police Service’.

Strongly criticising central government’s move, Punjab Manch leaders termed it as “discriminatory and unjustified”. “This action tantamount to making the state of Punjab and its people faceless and headless”, said Dr. Dharamvira Gandhi.

Punjab Manch leaders demanded that the union government immediately start the negotiations and the process to give Punjab its due, a Capital of its own that shall represent it in its all dimensions.

⊕ READ A COPY OF MEMORANDUM submitted to Punjab Governor by PUNJAB MANCH: