Hartford,CT: State of Connecticut took boldest decision by recognizing Sikh Genocide of 1984 by Indian Government. by passing legislation to commemorate November 1st as “Sikh Genocide Remembrance Day” every year and by allowing Sikhs to do annual event in State Capitol. This decision was taken under Governor Dan Malloy administration even after India tried to stop them.
Even New Administration Under Governor Ned Lamont Acknowledged Month of June 2019 as “Sikh Memorial Month” that gave Sikh Community a sense of belonging in Connecticut.

Since 2014 Sikh are commemorating their Annual commemoration in various cities and last year event was hosted in State Capitol to commemorate November 1st as “Sikh Genocide Remembrance Day”.

This year where Sikhs are hosting annual candle light vigil outside Norwich City Hall on November 9th 2019 they are also doing educational campaign with hope that federal leaders will raise their voices in US Capitol just like House passed resolution to recognize Armenian Genocide. 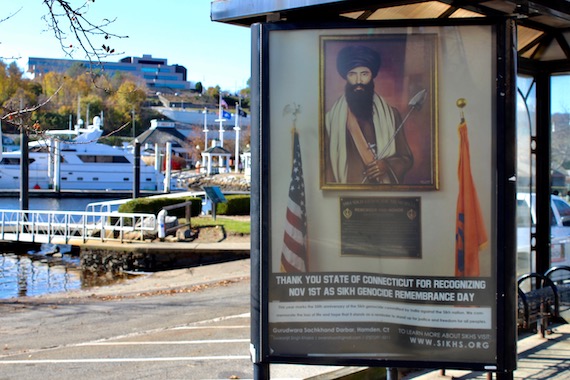 Manmohan Singh Bharara founding members of Sikh Community of Connecticut said “The simple message on these billboards are gesture that we thank State of Connecticut for recognising 1984 Sikh Genocide and We appreciate efforts of State for giving Sikh Community opportunity to share their narrative and pain with fellow Americans”.

⊕ ALSO READ – APPEAL TO ALL SIKH ORGANIZATIONS IN REGARDS TO REMOVAL OF “1984 SIKH GENOCIDE MEMORIAL” BY INDIAN GOVT. IN AMERICA

Swaranjit Singh Khalsa Coordinator of United Nations Council of World Sikh Parliament and President of Sikh Sewak Society International USA said “These kinds of media campaign and billboards boost education among fellow Americans about who Sikhs are and why they came to America.

Singh said “It is important that we Recognize the pain of Sikhs so they can grow out of it”.

The Media campaign was done by Gurudwara Sachkhand Darbar Hamden with help of other Sikh Organizations and Members from other Gurudwara’s with projection to reach five millions impressions according to traffic count.

When asked Swaranjit Singh about Indian Consulate recent interference in their town of Norwich he said “as a American I don’t like any government to interfere in my country and there is no doubt India should be made accountable for human rights violations that happened during that phase. its high time India take responsibility for its crimes against humanity ”.

Kuljit Singh Khalsa Member of Hamden Gurudwara Said “it is our duty to raise voice against Human rights violations no matter where it happens”.

The incident of Foreign Govt. Intervention in Connecticut have made Connecticut Residents concerned and alarmed the leadership to take action against foreign influence in day to day working of Connecticut municipalities and State legislation.