London: BBC Asian Network presenter and controversial DJ Bobby Friction has apologised for using offensive term against the Sikhs. In an earlier statement Bobby Friction had justified the use of term as “metaphor” but he had to face wrath of Sikh circles over social media. 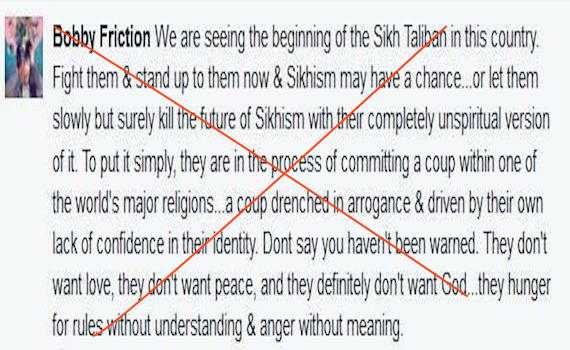 The latest statement from Paramdeep Singh Sehdev, better known as Bobby Friction, is below. A more sincere and instantaneous apology was needed given the level of offence & impact. The official BBC complaints process is continuing.

Bobby friction clarification: My remarks on social media Re: Sikhs

I understand my use of the term “Sikh Taliban” as a metaphor has caused offence for some Sikhs. For that I apologise unreservedly. It wasn’t my intention to cause pain to those people in the Sikh community who are upset by the remarks, and I hope they understand that was never intended whatsoever.

On reflection I can understand, given the broader context and history, why that term is an offensive one. I regret using that term and I think could have been more judicious in making my point.

I hope we can collectively move on from this with open dialogue & peace in our hearts.

Bobby Friction’s  earlier statement issued on August 14 was as under:

There have accusations on social media that I have called Sikhs “The Taliban” and that by comparing them to the Taliban I am essentially saying Sikhs commit the same offences against humanity that the Taliban are so famous for. Nothing could be further from the truth so let me explain what was actually said and meant on my personal non-BBC Facebook page.

I posted my thoughts on where a section of British Sikh political thought could end up at some point in the future. The metaphor was that we as British Sikhs were seeing the “beginning” of a group who felt they were allowed to police other Sikhs religious beliefs, with direct action if necessary. The “Taliban” metaphor was to show the symbolic similarities in policing others, and was not a literal comparison and should not be seen as that. It was also not a comparison on anything the Taliban stands for religiously.

As someone who has fought against all Religious Extremism my whole life I understand deeply what the Taliban has done and that its actions are pure Terrorism. I can see that if my remarks are taken out of the original context that the Taliban comment could offend some people and for that I’m sorry. I have however the right to discuss issues close to my heart on my own social media away from my radio show, and in fact everyone on all sides has the right to express their views freely without threats and trolling by others.

In the spirit of understanding, tolerance and the freedom of religion Sikhism is so famous for I hope you will understand my point of view.