Amritsar: The Dal khalsa and Shiromani Akali Dal Amritsar (Mann) has urged Sikhs for Justice (SFJ) to clear all “vagueness and ambiguity” in its 2020 referendum proposal.

The heads of both the organizations have sent a joint letter to SFJ coordinator Gurpatwant Singh Pannu. 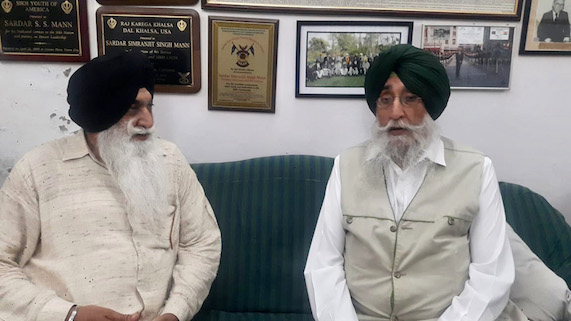 Simranjeet Singh Mann, president of Shiromani Akali Dal (Amritsar) and Harpal Singh Cheema, President of the Dal Khalsa hoped that SFJ leadership during the upcoming event on August 12 at London will spell out their thoughts as to how they were going to implement it as there were many grey areas in their proposal. “People of Punjab wants to know how much feasible and practical your proposal is”, ask both the leaders.

They clarified their reservations on 2020 proposal had nothing to do with August 12 London conference.

Below is the TEXT of the letter to Gurpatwant Singh Pannu:

Politics is the art of the possible. We believe that whatever has to be done for the Sikh nation to come out of the present crisis has to be within the realm of reality after thorough and sincere preparedness.

Dal Khalsa and Shiromani Akali Dal Amritsar are committed to the concept and creation of an independent Punjab or a sovereign Sikh state through peaceful and democratic means with the support and monitoring of an effective United Nations committee especially constituted for the purpose. To seek the rightful demand for referendum for Punjab under the aegis of United Nations both the organizations have presented the Sikh case at national and international fora number of times. Members and leaders of both the organizations have faced Indian state’s wrath, plethora of cases ranging from sedition to Unlawful Activities (Prevention) Act 1967 and served long detentions in Indian and foreign jails.

The Referendum 2020 proposed by ‘Sikhs For Justice’ brings forth a plethora of questions which need to be answered before we go public on the matter in Punjab. The proposal has build a public perception that Khalistan would be a reality in 2020. Such perception does not match with reality and creates a false hope among an already confused and disheartened populace.

Nearer home, a look at the Kashmir case. Despite commitment at the United Nations, India has so far reneged to call for a plebiscite and despite thousands dying and Kashmir virtually occupied by the Indian army, the UN too is guilty of not holding India to book and calling for an unilateral referendum in Kashmir. Pressure from the Kashmiri Diaspora, Pakistan and other Islamic nation’s has been completely ignored. In such a scenario without much on the ground, raising false hopes is not a good idea and can be counter-productive.

As there is extreme vagueness in the proposal of Sikhs for Justice, it is important to understand more.

Recently there have been Sovereignty referendums in Catalonia, Iraqi Kurdistan, Scotland, Quebec and Puerto Rico. We are conscious that worldwide there has been an increase in self determination movements in the world for reasons ranging from injustice to language to gross and systematic use of human rights.

In such a situation, the talk of online voting by you is far-fetched and unworkable even if it is unofficial and non binding. With internet penetration among the community quite minimal especially in rural areas, the whole notion can backfire setting more frustration and gloom that we are already in.

In the light of the above, we request you to share your thoughts about the many grey areas. We are sharing some questions that have cropped up during our discussion held on July 5 at Fatehgarh Sahib in which senior leaders of both the organizations participated.

The questions are as follows:

1. Can you clarify as to how Referendum 2020 will be done in Punjab? Who will do it?

2. The term referendum is a misnomer. Referendum is always carried it out under the guidance or order or monitoring of the United Nations, which is not the case in the present scenario.

3. In view of the above, it is fraudulent to propagate or allow this kind of propagation to spread and grow that a separate Sikh state will come into existence soon after the Referendum in 2020.

4. Will the referendum whenever held, be for limited for Sikhs or will be for all Punjabis?

5. How will it be determined as to who is an authentic voter?

6. Who will have the authority to decide who will be the voter? On what basis will the decision be made? What would be the authority and legitimacy of the individual or organisation who will decide so?

7. Any such task will attract the wrath of the state in Punjab and India. What mechanism is in place to protect the electorate in general and the volunteers in particular?

8. Who will lead the movement in Punjab?

We anxiously wait that you will come up with a clear understanding of this action which has raised huge expectations in some quarters and doubts among many others.