Hoshiarpur:  Taking a dig at the SGPC for making complete turnabout on Nanakshahi calendar, the Dal Khalsa today questioned the wisdom of the SAD and SGPC leadership for backtracking from the issue that’s core of the struggle to uphold the Sikh’s distinct identity. 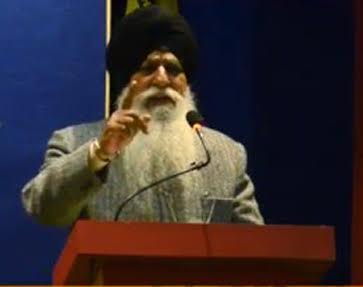 Party leader H S Dhami wondered how can the SGPC head or few executive members arbitrally nullify the decision taken by the general house of the institutions in March 2003.

He blamed corrupt and compromised politics of Badals for killing the letter and spirit of Nanakshahi calendar and recently reverting it back to Bikrami.

While observing the Parkash Purab of Guru Gobind Singh today as per original Nanakshahi calendar at local gurdwara, the Dal Khalsa head admitted that there’s a leadership void in religious sphere that could take “all-powerful but irresponsible” Badals to task. He said it’s ironic that Badals have gained control over all the levers of power and were ruining the religious institutions by proxy thus passing the onus of blame on light-weight leaders like Makkar and others.

Terming the present head of the SGPC Avtar Singh Makkar as spineless and incompetent, he lambasted the SGPC for committing fraud on Sikhs. Referring to the dismissal of Panj Piyare’s by the SGPC executive, he said it holds no water as the real strength of Panj Piyare’s lies in Sikh Panth and not in the services of the SGPC.

He said because of the failure of the SGPC in religious propagation that the naive Sikhs, out of ignorance and desperation, were being attracted or lured towards the dera’s, which had mushroomed over the years.

He urged the Sikhs to defeat the designs of all such sects and cults and dera’s which had recently mushroomed and were propagating the concept of “living gurus” as it was against the Guru’s philosophy and Sikh principles.