Addressing the press conference, party president H S Cheema said their group would hold a protest rally against constitutional wrongs, discrimination and denials on Jan 26th at Mansa.  “Our activists will hold protest by waving black flags to mark the day as black republic day”. 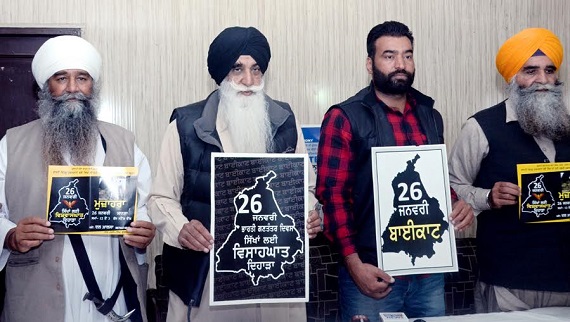 Furthermore, he stated that the last 68 years have been tumultuous years of denial, torture, destruction, vandalism and death. In the present inclusive and pluralistic world order, it was time for the Indian state to undo the injustice done to its minorities through the Indian Constitution, various laws and regulations and the use of police, paramilitary and army.

Accompanied by party vice-president Hardeep Singh Mehraj and general secretary Paramjit Singh Tanda, Cheema blamed the Indian state for being undemocratic and hypocritical, unwilling to engage in talks to evolve a wholesome and pluralistic resolution of the discord between India and Kashmir, Punjab, Nagaland, Assam.

Whilst sharing their respective program Dal Khalsa leaders gave a call to masses to boycott official functions of India’s Republic Day across the state in protest. While the government machinery celebrates this day, our appeal to the masses was to stay away from celebrations and reflect on the history of the dark shadow which this constitution of India has brought over to Punjab over the past 68 years.

Explaining as to why their group was against India’s republic day, he said the distinct identity of Sikhs was being subsumed under Article 25 (b) (2), under the shadow of Constitution and tricolour hundreds of Sikhs have been killed extra-judicially, Punjab river waters were being looted by subverting the Indian Constitution, denial of justice to 1984 massacres, trampling of Sikh rights and unequal rules for Sikh detainees.

Moreover, while quoting the Badal Dal and other Sikh organisation Harpal Singh Cheema said that Sikhs have been seeking amendments to the Constitution to undo Constitutional wrongs since last four decades, but ironically Indian rulers refuse to listen. “For Sikhs, there are no reasons to celebrate this day”. They said the history of this region with the Republic of India was a book stained with much blood and tears of Sikhs.

Taking strong exception to the demand of Indian government made to the UK government to ban ‘Sikh Federation UK’, he said the move shows New Delhi’s frustration and desperation. Nailing the bluff of Indian external affairs ministry spokesperson Raveesh Kumar that they take no cognizance of fringe elements which spread hate against Indian officials, H S Cheema said seeking ban on SF(UK) clearly shows that the reported move to ban the activities of Indian diplomats in abroad gurdwaras in UK, Canada and the United States has hit the right target.