London: Recently declassified secret British documents reveal that the British complicity with Indian government in latter’s evil designs against the Sikhs did not ended with Indian Army attack on Darbar Sahib (Amritsar) and other Sikh Gurdwaras in June 1984. The British government led by the then Prime Minister Margret Thatcher continued to serve the Indian side by snubbing voice of Sikh diaspora in Britain after genocidal massacres of November 1984 in which thousands of Sikhs were brutally killed throughout Indian subcontinent. 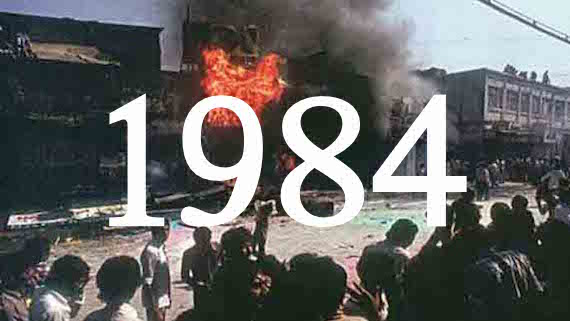 The letter written to Home Office by Leonard Appleyard, Private Secretary of the then Foreign Secretary Geoffrey Howe, advocates to keep ban on demonstration by British Sikhs for the sake of lucrative arms deal with the Indian government.

Here is a copy of the declassified secret document:

Notably, the British complicity with the Indian state in latter’s evil designs against the Sikhs first came into light in January 2014 when certain declassified British secret files revealed that the UK government was involved with Indian state at certain levels in Indian Army’s attack on Darbar Sahib (Amritsar) and other Sikh Gurdwaras in June 1984.

After uproar from British Sikh diaspora the then British Prime Minister David Cameron ordered an inquiry into the matter by then cabinet secretary Jeremy Heywood. The Heywood review was rejected by Sikh groups dubbing it as incomplete and limited.

British Sikh groups have been demanding full public inquiry into the matter. The demand is backed by British Labour party.