New Delhi, India: The Delhi Sikh Gurdwara Management Committee (DSGMC) has demanded conquest of “Lal Qila” by the Sikh forces in 1783 be celebrated every year at government level. A press release by DSGMC says [t]he conquest paved the way for end of mighty Mughal rule in India and beginning of war for Independence.

“DSGMC is all set to celebrate ‘Delhi Fateh Diwas’ on March 21 and 22 for the second consecutive year. Shiromani Akali Dal – Badal led DSGMC which took over two years ago conceived the plan of commemorating unfurling of the Khalsa flag over Lal Qila in 1783 by Baba Baghel Singh”, the press release reads further.

“The efforts are being made to make it annual program and we want that government of India also to make commemorate the day,” demanded Manjit Singh GK the President of DSGMC, making announcement for this year’s program. 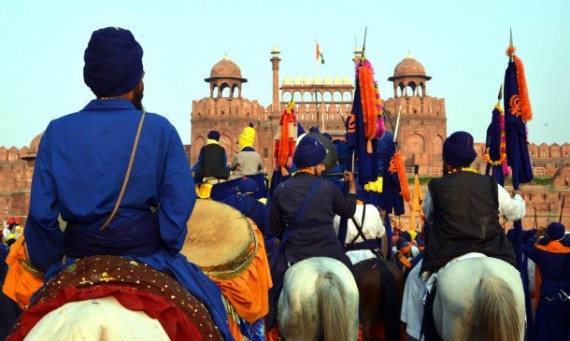 A view of Fateh Divas celebrations in 2014 [File Photo]

DSGMC general secretary Manjinder Singh Sirsa, said, “DSGMC started celebrating Delhi Fateh Diwas from last year but it happened after a long gap and the fact remain hidden that Sikhs conquered Lal Qila defeating powerful Mughal rule. The event should be recognized by the government of India”. He suggested for including this fact in the light and sound show at the Lal qila every evening.

He said that landmarks in Delhi such as Mori gate, Mithaee Pul and Tees Hazari are connected with the conquest by the Sikh forces.

Speaking about the two day event GK said, on March 21 Kirtani Jathas would recite Gurbani at Lal Qila and an attendance of over one lakh people of different religions is expected. “The two day event commemorates glorious past of Sikhs, their valour, and courage,” he adds.

Manjinder Singh Sirsa furhter said that DSGMC is celebrating the two days event with religious fervor and Sikhs living all across the world would feel pride about the Sikh history. Live telecast of the event is also arranged.

A light and sound and plays showing glorious Sikh history has also been organized in the evening on March 22,” he added. Further according him, heads of different religions would also take part.