Bathinda, Punjab (August 2, 2014): A day after his ticket was cancelled by Aam Aadmi Party (AAP) chief Arvind Kejriwal for his alleged involvement in a human trafficking case of his own village Poohla, Balkar Sidhu on Saturday said he would win the Talwandi Sabo seat for Arvind Kejriwal. 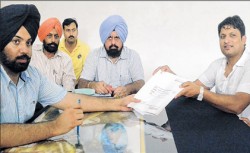 On the other hand Baljinder Kaur today filed her nomination as Aam Aadmi Party (AAP) candidate from Talwandi Sabo.

Balkar Sidhu, a Punjabi singer, filed his nominations as an independent candidate on August 02. However, he revolted against the party but he had all praise for Arvind Kejriwal. Moreover, he blamed Shrimani Akali Dal (Badal) for cancelation of ticket, which had raised the issue of his alleged involvement in human trafficking case.

“I am sure to win the seat and I am fighting for Arvind Kejriwal. I will win for him and will bring the “winning certificate” to him after the results are declared”, he told media persons.

On Saturday, AAP had allotted the ticket to Baljinder Kaur, a lecturer of English literature and fellow of Ph. D. from Punjabi University Patiala. Daughter of a social/political activist Darshan Singh Jagaram Tirath, Baljinder is backed on social media while Balkar Sidhu was opposed not only for his songs but for his involvement in the said human trafficking case.

Polling is set to be held for Talwandi Sabo Assembly seat on August 21, 2014.