Rajasthan (Mohammad Hamza Khan): Two days after he was allegedly attacked by a group of gau rakshaks for transporting cows in Alwar, Pehlu Khan, 55, a resident of Haryana, succumbed to his injuries on Monday night. Police said Khan and at least four others were attacked even as they produced documents to show that they had purchased the cows. “Gau rakshaks affiliated with the Vishwa Hindu Parishad and Bajrang Dal stopped four vehicles, near Jaguwas crossing on National Highway 8, on Saturday evening, alleging that they were illegally transporting bovines. These vehicles were coming from Jaipur, and were headed towards Nuh district in Haryana,” said Ramesh Chand Sinsinwar, SHO, Behror police station. 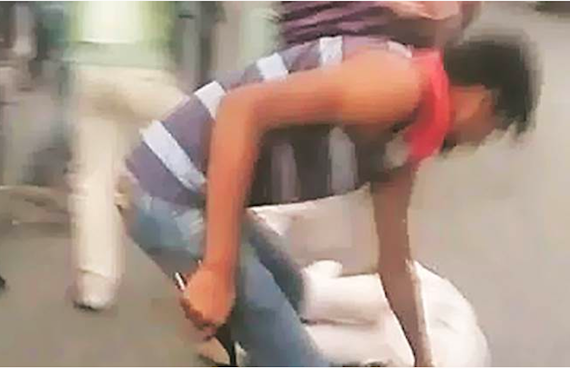 A video grab of the attack

While they attacked the men in the vehicles, they reportedly allowed one of the drivers, Arjun, to leave. “Five of the victims had to be hospitalised,” said Sinsinwar. “Of these, Pehlu Khan died at a hospital in Alwar on Monday night. A post-mortem was conducted and his body was handed over to his relatives today,” he said. While purported videos of the incident are being circulated on social media, no arrests have been made so far.

“We were returning from a Saturday fair in Jaipur. I had bought two milch cows for Rs 75,000, and I had all the valid documents with me. We were not even trying to hide the cows, as we were taking them in a pick-up truck. At around 6 pm on Saturday, the gau rakshaks stopped our vehicle and asked us our names. They allowed our driver, Arjun, to leave,” said Azmat, 22, who was with Khan in the pick-up truck.

“I told them I had all the documents but they pulled us out of the vehicle and beat us up. They took away Rs 35,000 from me. I later lost consciousness and woke up in a hospital at around 1 am on Sunday,” he said.

“Before he died, Pehlu told us that they beat him up and then told him to run, saying ‘tu buddha aadmi h, bhaag’ (you’re an old man, run away)… But they chased him and beat him up again,” said Pehlu’s uncle, Hussain Khan.

Meanwhile, Azmat and the three others who were injured — Irshad, Aarif and Rafiq — returned to Nuh on Tuesday, alleging that they did not receive proper care at the Kailash Hospital in Behror in Alwar. “Everyone at the hospital was looking down at us… Pehlu died because he didn’t receive proper care,” alleged Azmat’s brother, Yusuf, 35.

“I reached the hospital on Saturday night but they didn’t allow me to see my brother. I just wanted to know if he was dead or alive. They only granted permission on Sunday morning. We asked the district administration to shift them to another hospital but they did not agree,” said Mohammad Arshad, 23, also Azmat’s brother.

But Shyam Sunder Sharma, director of Kailash Hospital in Behror, denied the charges. “We gave them the best treatment and also gave discount on the fees… Police were posted at the hospital,” he said.

However, the transporters were also booked under the Rajasthan Bovine Animals (Prohibition of Slaughter & Regulation of Temporary Migration or Export) Act, 1995, he said. Alwar SP Rahul Prakash did not comment on the issue.