Amritsar Sahib: It is learnt that the name of SGPC backed Jathedar Giani Gurbachan Singh has not been accommodated in the posters issued by the SGPC pertaining to ‘Bandi Chhor Diwas’.

Notably, every year these posters are issued by the SGPC and are usually put up in and around Amritsar Sahib to inform the Sikh masses about the program for ‘Bandi Chhor Diwas‘. Usually the posters also consist of information regarding Jathedar Akal Takht Sahib’s annual address to the Sikh Sangat. But this time the name of SGPC backed Jatherdar Giani Gurbachan Singh’s name is missing from the aforesaid posters.

Ever since his involvement in unilateral pardoning the controversial Dera Sauda Sirsa chief Gurmeet Ram Rahim for imitating Guru Gobind Singh Ji, Giani Gurbachan Singh lost his credibility as Jatherdar and he was rejected by the Sikh panth. 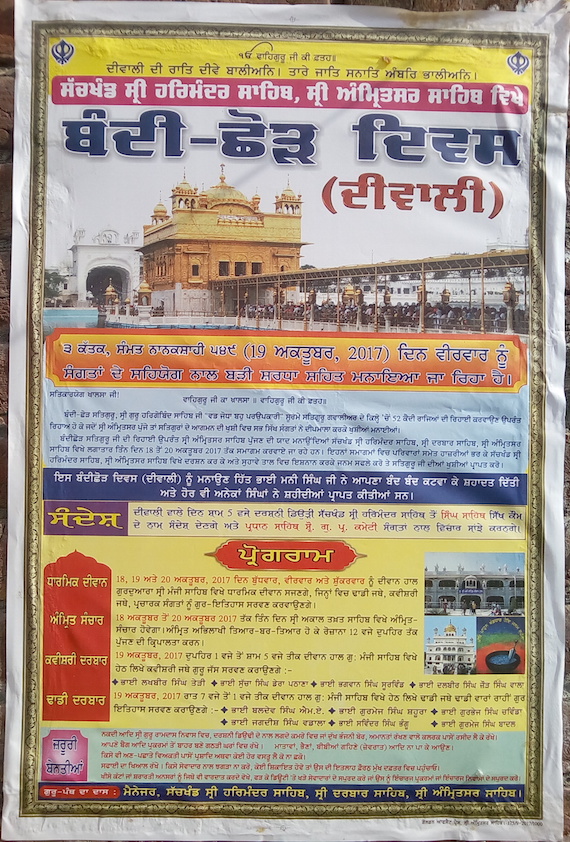 After last week’s clash between SGPC task force and supporters of ‘acting’ Jatherdars, appointed during Nov. 10, 2015 Panthic Gathering at village Chabba, has further intensified the situation against him.

Dal Khalsa in a statement has termed Giani Gurbachan Singh as a disgraced and disgusting person who lacks legitimacy due to his faulty actions.

So in order to arrest the controversy from raging further it is believed that the SGPC might have decided to do away with Jathedar’s name for the ‘Bandi Chhor Divas‘ posters, say observers.

WITH INPUTS FROM NARINDERPAL SINGH from AMRITSAR.