Delegation of Sikhs called on Portuguese representatives in North America and Europe to extend their gratitude for upholding the law in the extradition case of UK based refugee, Pamma.

The appreciation letter addressed to Francisca Van Dunem, states that “Portugal’s landmark decision in this case not only follows the letter and spirit of the law but it also reaffirms its commitment to human rights and refugee protection”. 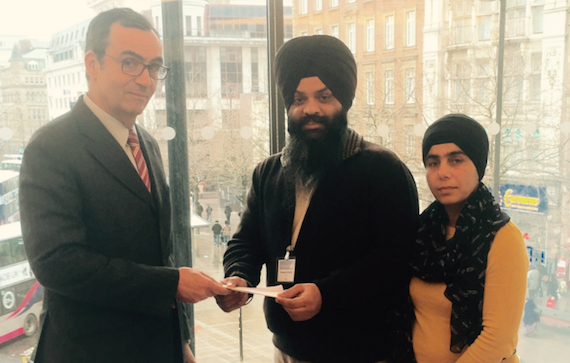 “Your positive approach in denying India’s request to extradite Paramjeet Singh on trumped on terror charges, will go a long way in upholding the human rights of oppressed religious minorities around the globe”, the letter concludes.

Thanking Portugal for re-uniting him with his family, Paramjeet Singh who met with Portuguese Consul General in Manchester, UK, to present the “Letter of Appreciation” stated that “for the last 25 years my family has been continuously hounded by the Indian authorities due to our support for Sikhs’ right to self determination”.

Paramjeet Singh, a Sikh nationalist was detained on December 18 pursuant to India’s request for extradition which was based on trumped up terror charges.

On February 12, Minister of Justice ordered the release of Paramjeet Singh stating that “various legal standards prohibit Portugal from sending Mr. Singh back to a country from which he had allegedly been persecuted and ran the risk of persecution”.