Ahemdabad: As per the reports emanating from the BJP ruled Gujarat, the state has again witnessed a communal violance claiming life of two member of the Muslim minority.

According to media reports a “communal clash” took place in Patan district of Gujarat on Saturday where Hindu mob ransacked a pre-dominently Muslim majority Vadavali village. At-least two members of the Muslim community were killed in violence.

It is reported that the incident occurred after two Class 10 students engaged in a fight after giving their Board exams.

“After the scuffle, the students alerted the villagers in the area about the fight, following which, a mob consisting of around 5,000 people marched to the Vadavali village where residents are pre-dominantly Muslims. They ransacked dozen of homes and torched more than 20 houses,” reads a report on NewsX website. 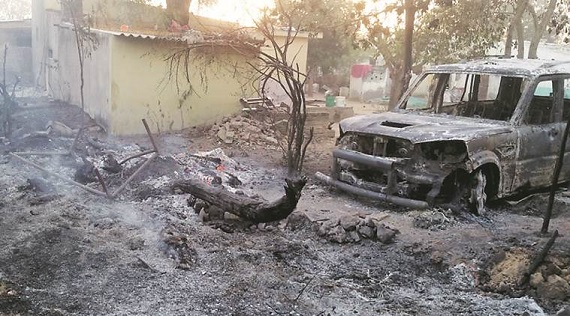 Charred remains speaks about the Horror by itself (Photo Courtesy: Express Photo)

Authorities said that they fired more than seven rounds of tear gas shells into the crowd to disperse them.

The Indian Express (IE) has quoted an undisclosed police source saying: “A combing operation is on in the village, located around 100 km from Ahmedabad, police said, adding the situation is now peaceful”.

Tight security is in place to avoid any further clash, Patan. Superintendent of Police A G Chauhan reportedly told media.

“A total of 150 police personnel from Patan and Banaskantha districts are stationed at the village apart from two companies of State Reserve Police and several senior police officials. The situation is peaceful,” IE quotes A. G. Chauhan.

An officer at Chanasma police station said the members of the two communities filed cross FIRs against 45 persons. He said 31 persons have been booked under various IPC sections, including 302 (murder), 147, 148, 149 (rioting armed with deadly weapons, unlawful assembly), 395, 397 (robbery), 435 and 436 (mischief by fire) reads a quote from a report publised in the English vernacular.

It was further reported by the media sources that besides, 14 persons have been booked under all the above sections except that for murder, the official said. One person had yesterday succumbed to injuries sustained during the clash while six others were injured.

Media sources further indicated that after the attack, a number of Muslim residents have fled the village and have taken refuge in other neighbouring places. Police further added that the security officials will be deployed in the area to maintain peace and stability.