Chandigarh: Caught in a complex situation Shiromani Akali Dal (Badal) has attempted to save its face on agriculture ordinances issue by tendering resignation of Harsimrat Kaur Badal from the Union Cabinet. SAD (B), a political ally of BJP, was given cabinet berth in BJP led Union government.

SAD (B) is facing internal and external challenges. The party is internally split and many senior party leaders have already parted their ways. SAD (B) has also lost its credibility among the Sikh masses since 2015 beadbi incidents. Another basic segment, the farmers were also up in arms against SAD (B) as Harsimrat Kaur Badal was part of cabinet which cleared agriculture ordinances that are being considered as ‘anti-farmer’ by Punjab’s farmer unions due to certain apprehensive provisions. 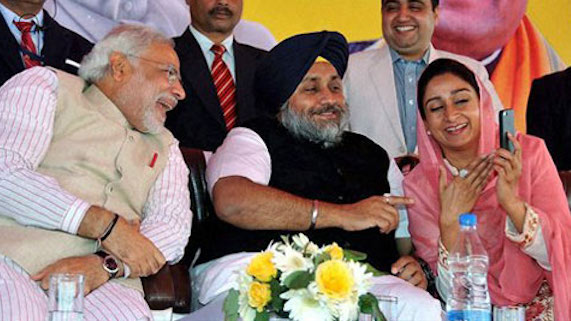 SAD (B)’s relation with BJP is also at the edge as there is a clear impression that BJP now seeks Badals as a liability.

Interestingly, even though the Modi government is moving forward with its plan to convert the ordinances into the law, the SAD (B) is saying that it will keep intact its alliance with the BJP. Critics have already started pointing that SAD (B)’s decision to move out of Modi cabinet is nothing more than a face saving exercise.