New Delhi: As per the media reports Haryana chief minister Manohar Lal Khattar along with a high level delegation here on Wednesday (Sept. 6), met newly appointed Union Water Resource Minister Nitin Gadkari while trying to garner the support of his party comrades (both Center & state have BJP governments) urged him to intervene and get the controversial SYL canal completed. 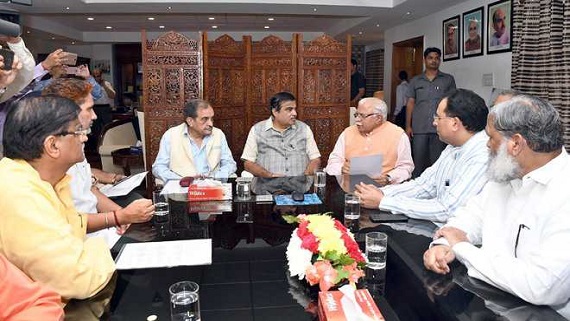 Manohar Lal Khattar while favouring to use expedient measures to get the controversial project completed reportedly said “The state is facing water shortage and farmers are the worst affected. The SYL canal was devised to channel Haryana’s share of waters of rivers in Punjab with the good offices of the Union Government.”

Subsequently, a brief historical sketch of the project was presented to Gadkari. The construction work on the project in Haryana had long been completed, and the political leadership of Haryana intend to get the part of the canal constructed which fall in Punjab’s territory.

Furthermore, the delegation tried to quote the Presidential reference and the SC’s verdict on the SYL issue so as to justify the loot of Punjab’s river water. They also claimed that “justice to people of Haryana has already been delayed.”

Eventually, Nitin Gadkari assured the delegation of his personal and constructive intervention in this matter while keeping in view the interests of the state of Haryana, notes The Tribune (TT).

It is notable that all the political parties of the state of Haryana irrespective of their differences are united and fully backed by the Indian state in their quest to drain Punjab of its vital natural resources. On the other hand due to vested personal political and economic interest, consciously dead political class of Punjab has failed to put up stiff resistance against this loot and has only limited itself upto playing delay tactics.