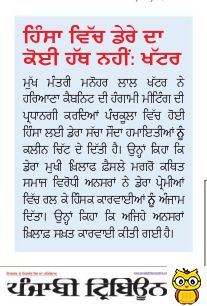 The vernacular further notes in its report that M L Khattar said that after the verdict against Dera chief alleged anti-social elements got mixed with Dera Premis and committed the violent activities. He said that strict action was taken against such elements.

Haryana government is already facing sever criticism for its failure to prevent the gathering of large numbers of dera followers in Panchkula ahead of August 25 verdict.

The Bhartiya Janta Party (BJP) was in close proximity of the controversial Dera. The Haryana CM had been sharing stages with the convicted dera chief Gurmeet Ram Rahim. Ahead of assembly polls in Haryana the Indian Prime Minister Narendra Modi had showered praise to Dera Sauda Sirsa.

It is notable that Panchkula witnessed large scale violence after Dera Sauda Sirsa chief Gurmeet Ram Rahim was convicted for rape by a special CBI court yesterday. Agitated dera followers, who were allowed by the Haryana government to gather in large numbers in Panchkula turned violent and burned downed vehicles and other properties, including media vans. As per media reports 30 persons were killed in the violence and police firing.