California: “Guru Gobind Singh and other Gurus were able to bring about the Sikh Revolution by associating with Shudras and Ati-Shudras and by disassociating from upper Varnas and Brahmans,” stated Dr. Manisha Bangar to a diverse gathering of the Indian Sub-Continent diaspora organizations at a seminar in Central California on Sunday, May 21.

In her final appearance after a month-long tour of North America to speak on behalf India’s depressed classes, Dr. Bangar repeatedly highlighted the relationship between the Hindu caste system and mass poverty.

There is no true democracy in India,” she declared. “Through nefarious means, three percent of Brahmans have betrayed the policies of the Indian Constitution to gain total control of 90% of the country’s resources. They have done this by denying the rightful representation of 90% of the population who constitute the Backward Classes and religious minorities.

Democracy means nothing if there is no equality of opportunity, but even after 70 years of self-rule, the existence of the caste system as an overarching social law has denied this right to the Mulnivasi Bahujans [original people in the majority] despite it being a fundamental right.”

Dr. Bangar is the Vice-President of the All India Backward and Minority Communities Employees Federation (BAMCEF), an organization composed of educated employees from oppressed and exploited communities among Indian society. The primary objective of BAMCEF is to unite these communities so they can “provide hope and help to one’s own downtrodden society which has been made to feel as hopeless and helpless through the centuries old tyrannies committed on it by the exploiters and oppressors in India.” The seminar was jointly hosted by the Bhim Rao Ambedkar Sikh Foundation (BRASF) and Organization for Minorities of India (OFMI).

Originating over 2,000 years ago, the Hindu caste hierarchy is a system of social stratification which segregates the population into four separate castes of increasingly degraded values. The top are Brahmans; the bottom are Shudras. Outside the system are Ati-Shudras — also known as “Untouchables” or outcastes. Commonly called Dalits (meaning “broken”), they claim the label Mulnivasi (meaning “indigenous”) and ally themselves with the Shudras. The Mulnivasi have traditionally been treated as virtually subhuman, although the practice of “Untouchability” has been constitutionally prohibited since India’s independence in 1947.

In 2016, however, the United Nations warned: “Violence against Dalits is reported to be widespread and driven by the effects of the caste system and the lack of justice for victims.” Meanwhile, the International Dalit Solidarity Network reported in 2009: “The caste system continues to exist, while the dominant castes wish to uphold their power and dominance.”

In 2014, Human Rights Watch explained: “Caste continues to be used to justify discriminatory, cruel, and inhuman treatment inflicted upon millions of habitats of the sub-continent—especially in areas of rural India where caste-designation still dictates rigid roles and entitlements.” 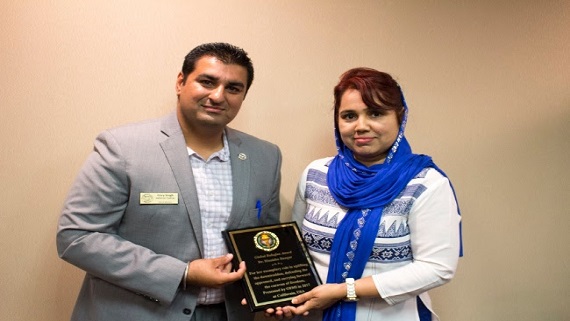 Rebutting Shah, Bangar declared: “The argument given by mischievous Brahman pseudo-historians that the caste/varna system is a British or Western construct or, at best, was created by Muslim invaders, is untenable and seeped in falsehood. If that is true, then against what social order was Siddhartha Gautama Buddha fighting over 2,500 years ago? What were Kabir and Ravidas and Guru Nanak speaking against when they exposed caste discrimination and called for a society of equality?”

Bhajan Singh and Ravi Shergill also briefly took the podium at the seminar in Lathrop, CA, USA. As the Founding Director of OFMI, Singh urged a unified front of all affected communities in the struggle to advance liberty and protect human dignity in India. “Buddhists, Christians, Muslims, Sikhs, and all those historically oppressed and marginalized by the caste system remain defenseless against the unspeakable violence perpetrated by the rulers of the Brahman Raj,” he said. “The Mulnivasi Bahujans must heed the words of Dr. Ambedkar and discard the shastras, which enshrine the poisonous doctrine of caste as a religious ideal.”

Commonly called the shastras, the Hindu religious texts were strongly denounced by Dalit civil rights champion Dr. Bhim Rao Ambedkar in his 1936 text, “Annihilation of Caste.” Dr. Ambedkar stated: “You must take the stand that Buddha took. You must take the stand which Guru Nanak took. You must not only discard the shastras, you must deny their authority, as did Buddha and Guru Nanak. You must have courage to tell the Hindus that what is wrong with them is their religion — the religion which has produced in them this notion of the sacredness of caste.”

Eighty years after Ambedkar’s pronouncement, Dr. Bangar finds little hope for the downtrodden in the policies of any of the major political players in India. Excoriating the Hindu Nationalist (also called Hindutva) policies of the ruling sociopolitical powers, the Bharatiya Janata Party (BJP) and Rashtriya Swayamsevak Sangh (RSS), she said, “Hindutva means nothing but a sociopolitical structure of the society based on caste and varna with the Brahman on top.”

Yet the BJP’s competitors also found no favor with Dr Bangar, as she explained: “The pseudo-nationalism of the Indian National Congress, the Communist Party of India, and Aaam Aadmi Party are all almost identical to the Hindutva brand of nationalism spread by the RSS and BJP. If the latter is brutal, the former is akin to slow poison. As such, the so-called secular progressivists in India can never become a force by which radical changes can be brought about to correct the country’s worsening sociopolitical scenario.

On the surface, they appear to stand in opposition to the rightwing politics of the BJP and RSS, but just one layer down they stand in full support of the caste/varna system of graded inequality. They are all against the policy of representation of the Backward Classes and against the emerging independent political leadership of the Mulnivasi Bahujans. The reason is that the secular progressivists also come from the same upper-caste, Brahman oppressor class as the rightwingers.”

At the conclusion of the seminar, City of Manteca Mayor Mayor Pro-Tempore Gary Singh presented Dr. Manisha Bangar with the “Global Bahujan Award,” which read: “For her exemplary work in uplifting the downtrodden, defending the oppressed, and carrying forward the caravan of freedom in India.” The award from OFMI was presented by Gary Singh in conjunction with OFMI affiliates Pieter Friedrich, Gurneel Singh Boparai, and Bhajan Singh.

“We are deeply grateful to Dr. Bangar for her unwavering commitment to the prosperity of the people of Bharat,” said Bhajan Singh. “Her global leadership in cultivating justice, equality, and fellowship among humanity is an inspiration for others to emulate.”