‘Peacefully protesting against the government is not a crime. Not agreeing with the policies of a government does not make you a traitor either. While students and other citizens of India have largely ensured peaceful protests across the country against the Citizenship (Amendment) Act (CAA) 2019, political leaders have resorted to making hateful statements about the protesters and authorities have failed to protect peaceful protesters from violence,” said Avinash Kumar, Executive Director of Amnesty International India.

Ahead of the legislative assembly elections in Delhi, the Union Home Minister Amit Shah in a campaign rally asked the audience to “press the button with such anger that the current is felt at Shaheen Bagh”. He told the audience that their vote to the Bharatiya Janata Party (BJP) could keep the “country safe and prevent thousands of incidents like Shaheen Bagh”. Shaheen Bagh has become the epicentre of the anti- CAA protests in the country. Besides being a completely peaceful protest in the capital city, it has largely been led by Muslim women.

On 27 January, referring to the protesters at Shaheen Bagh, the Union Minister of State for Finance, Anurag Thakur encouraged the crowd to chant ‘Desh ke gaddaro ko, goli maaro saalo ko (shoot the traitors of the nation)’. This slogan is often used against the people speaking out against the Citizenship Amendment Act (CAA). On 28 January, a BJP Member of Parliament, Parvesh Verma indulged in divisive fear-mongering and claimed that the protesters from Shaheen Bagh would enter citizens’ homes and “rape your sisters and daughters and kill them”.

On 30 January, the anniversary of Mahatma Gandhi’s assassination, a man fired a pistol at a group of anti-CAA protesters, injuring a student before walking away while waving the firearm and shouting “Yeh lo Aazadi” (Here, take your freedom). The video footage of the attack shows the police officers standing on the sidelines. The injured student was seen bleeding from his left hand and was taken to a nearby hospital. The shooter who was later identified as a minor was arrested by the Delhi police and a case of attempt to murder has been filed against him. According to media reports, before the shooter opened fire, he wrote a post on his Facebook saying “Shaheen Bagh, Khel Khatam” (Shaheen Bagh, the game is over).

Such speeches by political leaders also have a wider human rights impact on the society. The Chief Minister of Uttar Pradesh, Yogi Adityanath had previously pledged that he will take ‘revenge’ on those involved in alleged violence in the anti-CAA protests. Amnesty International India’s recent fact-finding in Varanasi, Uttar Pradesh had found that many protesters who were injured during the anti-CAA protests were scared to seek medical aid from nearby hospitals and preferred to travel to faraway places in the fear that they would be arrested or asked to pay for property damage even when they did not indulge in violence. This restricts the affected person’s access to healthcare and stands in clear violation of India’s international obligations under the International Covenant on Economic, Social and Cultural Rights. 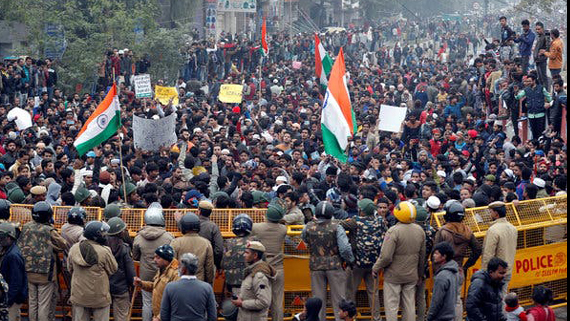 “A hateful, divisive and dehumanising rhetoric has been unleashed on students and those

protesting against the equally divisive Citizenship (Amendment) Act by our elected representatives. Public officials must be held to stricter standards when it comes to speeches that are discriminatory, advocate hatred or incite violence. Such speeches must definitely be addressed by disciplinary or criminal sanctions”, said Avinash Kumar.

Indian authorities have also shown their disdain towards the right to freedom of expression by carrying out sweeping arrests under repressive and colonial laws.

On 30 January, two people including a teacher and mother of a student were arrested for sedition in a school in Bidar, Karnataka. The Bidar police had registered the case for “insulting” Prime Minister Narendra Modi by allowing the performance of a play on CAA and the National Register of Citizens (NRC). Earlier, a student in Mysuru, Karnataka was charged with sedition and arrested for carrying a “Free Kashmir” placard at a solidarity march in support of the students who were protesting against CAA in New Delhi.

“The CAA is a bigoted and divisive act. The CAA along with the National Population Register (NPR), NRC and the Foreigners Tribunal can lead to scores of citizens being declared stateless across India. These are genuine concerns and the people have the right to peacefully protest. But ever since the CAA was passed in the Parliament in December 2019, the Government of India has done very little to assuage these fears. Instead the peaceful protesters have been threatened, demonised and branded as anti-nationals; arrested under repressive laws; or treated with violence. In May 2019, Prime Minister, Narendra Modi said, ‘We are for the people who trusted us and those whose trust we need to win. Nobody should be ‘other’ for us. It takes a lot of strength to try and win the hearts of people’“.

“Unfortunately, the Prime Minister has shown no strength to win the trust of those protesting peacefully across the country,” said Avinash Kumar.