November 7, 2018 | By Organization for Minorities of India*

Malawi (OFMI*): Amidst growing controversy over a statue of Gandhi which the Indian government demands that Malawi install in exchange for foreign aid, Indian Vice President Venkaiah Naidu visited the southern central African country to offer double its original $10 million investment on the condition that Malawians accept the statue.

On October 30, India’s Ministry of External Affairs stated, “Africa has been accorded the top priority in India’s Foreign Policy.” Part of its policy this year includes proposals to build Mahatma Gandhi International Convention Centers in nine African countries, including Malawi. One of the requirements in Malawi was installation of a statue of the Indian political and religious leader Gandhi, a plan which met unexpected resistance. 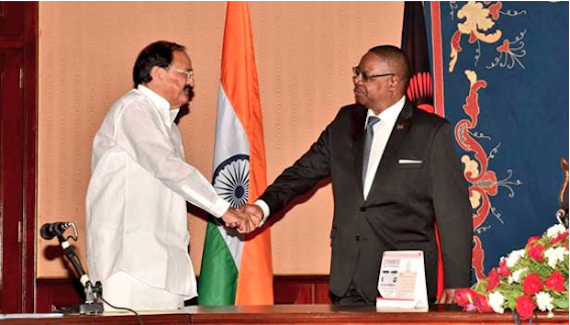 “In the ongoing deal, yet to be sealed, where the governments of India and Malawi are to finalize proposed investments worth over $20 million, including the building of convention centers in the cities of Blantyre and Lilongwe, the Indian Vice President, during his two day visit to Malawi, reiterated and affirmed India’s resolve to accomplish the installation of a monument in veneration of Mohandas ‘Mahatma’ Karamchand Gandhi in the city of Blantyre even though the proposed project has faced resistance from much of Malawi’s population and is currently blocked from proceeding by an order of injunction issued by a Malawian high court,” reports Mpambira Aubrey Kambewa. Speaking as one of several activists involved in working to stop the statue, Kambewa states, “We of the #GandhiMustFall Movement in Malawi are not surprised by the aggressiveness, arrogance, and total lack of sensitivity portrayed by Vice President Naidu. This action has, in effect, spurred us to further accelerate our efforts and has also accorded us a face of the vague enemy we face in this battle. We shall go head on with this figurehead.”

Naidu was set to unveil the statue during his November 4-5 visit to Malawi. However, the October 30 injunction blocked installation pending a November 12 hearing.

Malawian activists premise their opposition on two major arguments. First, Gandhi has nothing to do with Malawi. Second, Gandhi was racist towards black Africans in word and deed during the 21 years he spent as an attorney in South Africa. Among evidences they have provided in support of their second claim is that Gandhi regularly referred to black people as “Kaffirs,” a racial slur, and made statements such as “Indians are undoubtedly infinitely superior to Kaffirs.”

“After his decades of grooming in the paramilitary ranks of the Rashtriya Swayamsevak Sangh, it makes perfect sense that Venkaiah Naidu is the figurehead of India’s neo-colonization of Africa,” remarks Arvin Valmuci, a spokesperson for Organization for Minorities of India (OFMI). “He has fully internalized the RSS’s methods of bullying and intimidation. His embrace of the RSS’s supremacist philosophy of Hindutva is clearly demonstrated in his insistence on imposing India’s supremacy over Malawi. Naidu wants to buy the dignity of Malawians, but the dignified people of that country are saying ever louder and clearer that Malawi is not for sale.”

Naidu belongs to the Bharatiya Janata Party (BJP), the Hindu nationalist party which came to power in India in 2014. He has been a member of the RSS since his youth and, at the age of 24, joined its student wing, the Akhil Bharatiya Vidyarthi Parishad (ABVP). Running on an ABVP ticket, he was elected Student Union President at his university. He joined the BJP at its formation in 1980 and became its spokesperson in the 1990s. In July 2002, he became National President of the BJP, just four months after the State of Gujarat’s BJP government (led by Chief Minister Narendra Modi, who is now Prime Minister of India) was implicated in sponsoring a pogrom that led to the deaths of over 2,000 Muslims.

The RSS was recently labeled by America’s Central Intelligence Agency as a “nationalist” organization and has been described by the United Nations as an “ultra-nationalist” and “extremist Hindu” group. According to the U.S. Commission on International Religious Freedom (USCIRF), the RSS — an armed, uniformed, all-male outfit — adheres to an ideology of Hindutva which “holds non-Hindus as foreign to India” and is responsible for “acts of violence against non-Hindus.” The U.S. State Department reports, “Members of the BJP, the RSS, and other affiliated organizations (collectively known as the Sangh Parivar) have been implicated in incidents of violence and discrimination against Christians and Muslims.”

Naidu, however, says that “Hindutva… is the soul of our Nation.” Praising “the Rashtriya Swayamsevak Sangh and its ideological moorings,” he states, “The RSS is a great organization of the country, ready for selfless service. I have an RSS background and I am proud of it.”

One of the most recent incidents of large-scale violence against minorities in which the RSS was implicated occurred in 2008 in the Indian State of Odisha. Over several weeks, at least 40 Christians were killed, churches and homes were burned, and tens of thousands were made refugees. Odishan Chief Minister Naveen Patnaik, who was in office during the pogrom, reported, “Members of RSS… were involved in the violence.”

Linking the violence to “anti-conversion” laws, which typically require notification or even permission of local authorities before a person is allowed to change their religion, USCIRF reports, “States with these laws have higher incidents of intimidation, harassment, and violence against religious minorities.” Yet, as a Member of Parliament in 2014, Naidu stated, “We have legislation from Odisha…. Conversions are creating social tensions…. Let there be anti-conversion laws in all the states. Let there be an anti-conversion law at the Centre also.”

“Naidu is a champion of the xenophobic, chauvinistic, and fundamentally genocidal policies of Hindutva,” comments Valmuci. “No wonder he is the figurehead of a Hindu nationalist ruled India’s campaign to shove a Gandhi statue down the throats of non-consenting Malawians. For us, #GandhiMustFall and #HindutvaMustFall are inextricably linked movements.”

Notably, in March 2018, Indian Minister of State for Home Affairs Hansraj Gangaram declared, “Statues of foreign leaders are not required in India.”