Chandigarh: Sections of the mainstream Indian media today aired a video clip of Scottish citizen Jagtar Singh Jaggi and maintained that it was his the video of his “confession”.

The media reports came during a time when the police and investigation agencies are yet to file chargesheet against him the courts. But the Indian media that aired this video tended to pass its “verdict” against Jagtar Singh Jaggi holding him accountable.

Media outlets like Times Now, Aaj Tak and India Today today purportedly played video clips and dubbed them as “confessional statements: of Jagtar Singh Jaggi  who is in Punjab Police custody since his arrest from Jalandhar on November 4.

Shockingly, the Times Now anchor dubbed Jagtar Singh Jaggi as “people from Kerala” while adding that the video clips disclosed “plans from Pakistan to fund political murders brutal killings of RSS members, these clips also disclose diabolical plans confirmed by hitman terrorist confirm Pakistan’s plans to fund proxies on Indian soil“. Apparently, Time Now was not even clear that it its “Exclusive Video” was related to Scottish citizen Jagtar Singh Jaggi who is arrested by Punjab  or ‘people in Kerala’. 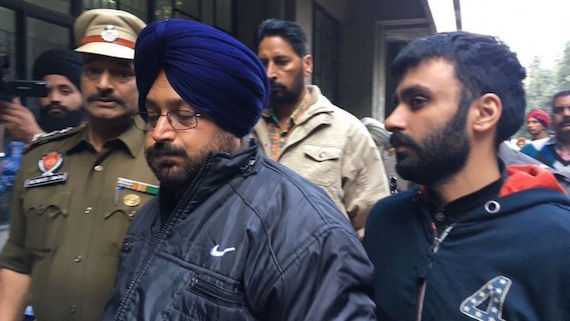 The video shows Jagtar Singh Jaggi talking that how he became aware of Sant Jarnail Singh Khalsa Bhindrawale and events that lead to the Sikh genocide of 1984 and how he use to collect data and translate articles from Punjabi to English punished in various Punjabi magazines.

Reacting sharply against these reports making rounds in the mainstream media, Jagtar Singh Jaggi’s  counsel Advocate Jaspal Singh Manjhpur alleged that the Indian agencies and the Indian media have hatched a conspiracy against Jaggi to hold ‘media trial’.

Referring to a news reported by Aaj Tak in which it is claimed that the video clip was part of National Investigative Agency (NIA)’s investigation Advo. Jaspal Singh Manjhpur said that the neither the NIA has arrested Jagtar Singh Jaggi in any case till date nor ever secured his custody from any court of law.

“Jagtar Singh Jaggi was arrested by Moga district police on November 4 and he remained under their custody till November 17 and since then he is in the custody of Ludhiana police.

“It is a matter of grave concern as the media outlets are maintaining that it was their exclusive video. Did the investigation agency- the Punjab police allowed media to video tape Jagtar Singh Jaggi? If it was so under which law and with which court’s permission it was done?”, he asked while maintaining that no such permission was ever granted by any court.

“Moreover, as the NIA said that the video clips were part of NIA investigation then the question arises that did NIA surpassed the courts and the legal procedure to gain access to Jagtar Singh Jaggi and then video recorded him and then leaked this video to media?”, he asked while adding that Aaj Tak’s claim has indirectly raised question over credibility and integrity of India’s top most investigation and prosecution agency.

Commenting on legal aspects of  the issue he said that the clips played by Indian media have no evidentiary value during trial in the court.

He said that it was usual police practise to coerce persons in custody to make false statements and these statements, even if video recorded, does not become evidence in the eyes of law.