Indian Diplomats Creating Atmosphere of Intimidation under the Garb of Community Outreach in Canada: Sikhs For Justice (SFJ)

Toronto: The increased activism of the Sikh diaspora in Canada for propagating their right to self determination has pushed the Indian state into defensive mode, which can be clearly seen from the fact that the Indian government has come up with initiative with the soul objective of eroding the  support for self determination in Canada, the activist group Sikhs for Justice has complained of “intimidation” to the Canadian minister of foreign affairs on this matter.

The Hindustan Times notes that the letter reportedly sent by the SFJ last week was based upon a news report published by it which stated about the visit by India’s Consul General in Toronto Dinesh Bhatia to gurdwaras in the Greater Toronto Area.

“Under the cover of ‘community outreach’, the Indian diplomats are creating an atmosphere of intimidation among the Canadian Sikhs who have taken refuge in this country from India’s constant persecution,” SFJ’s legal advisor Gurpatwant Pannun reportedly stated in the letter to Canada’s Foreign Minister Chrystia Freeland. 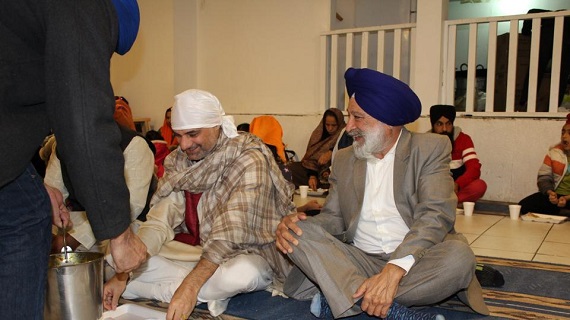 Visiting India’s Consul General in Toronto Dinesh Bhatia at a gurdwara in the Greater Toronto Area . (Photo by HT)

“Approaching the foreign minister is an initial step towards blocking Indian diplomats from attending events in Canadian gurdwaras,” Gurpatwant Pannun said in a statement.

He also accused the Indian government of asking those seeking such visas to sign a document disavowing support for the Sikh cause and argued that such a condition runs counter to Canada’s policy of freedom of expression.