Washington, DC: October 22, 2019 — (OFMI): A joint delegation of Hindu and Muslim organizational leaders met with US Congressman Ro Khanna on October 21 to thank him for his recent statement rejecting the political ideology of Hindutva.

Rasheed Ahmed and Ajit Sahi of Indian American Muslim Council joined Sunita Viswanath of Hindus for Human Rights at Khanna’s office in Washington, DC. According to HHR, they “expressed solidarity and support for his commitment to pluralism and justice for all.” Khanna earned their gratitude for his August 29 Tweet: “It’s the duty of every American politician of Hindu faith to stand for pluralism, reject Hindutva, and speak for equal rights for Hindus, Muslims, Sikhs, Buddhist[s] & Christians.” 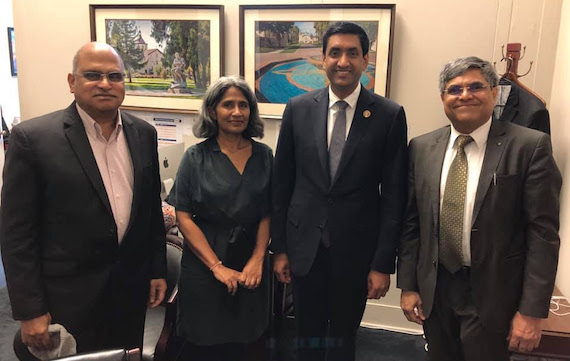 Hindutva, defined by the United States Commission on International Religious Freedom as an ideology that treats non-Hindus as foreign to India, is the guiding philosophy of India’s ruling Bharatiya Janata Party.

“Modi’s political party (BJP) and its cultural counterpart organizations (RSS, VHP, etc.) form the backbone of the Hindutva movement,” noted Amar Shergill last month. An attorney who serves as an executive board member of the California Democratic Party, Shergill added, “Hindutva is a fascist and supremacist movement similar to white supremacist movements in the US. It mobilizes around a virulent religious ethno-nationalism, holding that India is a homeland for only Hindus and uses violence to intimidate compliance around its economic and political policies.”

Not all supported Khanna’s statement.

On October 3, approximately 25-30 people protested Khanna at a town hall event near San Jose, CA area. According to event organizers, most were allegedly members of Hindu Swayamsevak Sangh, the overseas wing of the RSS. They displayed signs denouncing Shergill as well as Pieter Friedrich, an analyst of South Asian affairs. Khanna’s call to “reject Hindutva” was posted in response to an article by Friedrich about US Congresswoman Tulsi Gabbard’s association with Hindutva organizations. 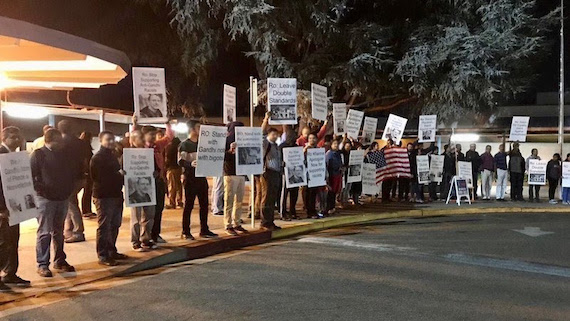 “Congressman Khanna set an example for his colleagues by braving the heat to stand strong against supremacy,” comments Organization for Minorities of India spokesperson Arvin Valmuci. “He should do much more. The best way to reject Hindutva is to lead the charge against its devious agenda. We call on Khanna to join his colleagues like Congresswoman Pramila Jayapal in challenging the Modi regime’s devastation of human rights in Kashmir. We also urge Khanna to take action to expose the foreign interference of the Overseas Friends of BJP in America’s sovereign elections, such as the way they have meddled with the campaign of Congresswoman Tulsi Gabbard. Words speak louder than actions.”

“Hindutva is responsible for an endless cycle of violence against non-Hindus in India,” says Brian Isai, an activist with OFMI. “One of the worst recent incidents of mass violence against Christians, though, happened in 2009 when the BJP’s opposition was in power. The United States needs to make human rights the touchstone of a relationship with India. Congressman Khanna should put his money where his mouth is and introduce an updated version of 2013’s House Resolution 417, which would require US government dialogue with India to be based on religious freedom and related human rights issues.”