New Delhi: Indian journalist Kuldip Nayar passed away in Delhi today.  His funeral will be conducted at 1 pm today at the Delhi’s Lodhi Road based crematorium. As per information his health condition deteriorated suddenly and he died.

Just in: Veteran journalist Kuldip Nayar passes away, funeral to be conducted at 1 pm at the Lodhi Road crematorium

He was considered to be an extended arm of the state apparatus and according to another senior Indian journalist Harish Khare, Kuldip Nayar had fathered the genre of gossip journalism and he was first to practise “embedded journalism”. 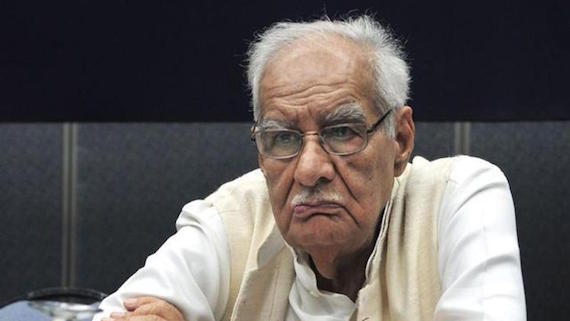 In a write-up titled: “Scoops, And Vanishing Cream” that has appeared in “Outlook” Magazine in July 2012, Harish Khare wrote:  “Undoubtedly, it could be granted, Kuldip Nayar is India’s most well-known journalist, and also a widely syndicated columnist. Just as the Beyond The Lines dust-jacket claims. Equally undoubtedly, KN (Kuldip Nayar) can be credited with two innovations. He was perhaps the first to experiment with a practice that later came to be known as “embedded journalism” -”.

(READ MORE AT: KULDIP NAYAR FATHERED THE GENRE OF GOSSIP JOURNALISM – HE WAS FIRST TO EXPERIMENT THE PRACTICE OF EMBEDDED JOURNALISM: HARISH KHARE)

In July 2012 Kuldip Nayar had tendered unconditional apology to the Sikhs for mischievous statements about Sikh struggle and Sikh personalities in his autobiography beyond the lines. (READ MORE AT: KULDIP NAYYAR APOLOGIZES TO THE SIKHS IN AN ATTEMPT TO REPAIR HIS DAMAGED IMAGE)

Watch Sikh Siyasat Talkshows About Kuldip Nayar and his works: