When Kamala Harris ran for President, she did so with the selling point that her Asian heritage would be a sticking point with the emerging South Asian voting bloc in the United States. But there was a decision made by her when she was Attorney General of California, where she denied Sikh prison guards the ability to practice their faith and keep their religious identity in tact. Not only did this show that AG Harris was insensitive to the practice of Sikhism and the beliefs we adhere to, it shows the ways in which Sikhs also play a role in the oppression of others when they serve in institutions that jail our black and brown community members.

When Senator Klobachar ‘stepped out’ of consideration for Vice President of the United States (given how she also played a role in not holding police accountable as a District Attorney), she mentioned that she wanted to see a woman of color become Vice President. Probably in a nod to California Senator Kamala Harris, the Senator from Minnesota wanted to get rid of the possibility that the Democratic base would feel invalidated if a white woman got the post and perhaps save face in the case that the Biden campaign thinks that her record as a prosecutor could hinder the Democratic ticket in anyway.

But Senator Kamala Harris has her own tricky past to contend with as well. In November of last year Attorney Rajdeep Singh Jolly launched an online petition to hold Harris accountable for civil rights violations. In a debate with Joe Biden, Senator Harris was quick to note that the former Vice President and U.S. Senator had been historically on the wrong side of history and supported discriminating policies that disenfranchised communities of color and prevented them from practicing their faith while keeping their religious bearings.

As Bill McEwen writes in the Fresno Bee:

The fact that Sikhs remain a mystery to most Americans is startling in light of their numbers. There are believed to be between 500,000 and 700,000 Sikhs in the United States, roughly half of them in California, and 27 million worldwide. Sikhism is one of the largest organized religions in the world, with 20 million members living in India.

“She accused Joe Biden of being weak on civil rights, but I think that was being disingenuous,” Jolly said. “If she’s going to call out other candidates for their shortcomings on civil rights issues, she needs to own up to her own mistakes,” he said.

The petition alleged that just three days after she was sworn in as California’s first Indian-American attorney general, Harris “argued to dismiss a lawsuit” filed by a Sikh man for being denied a government job because of his beard.

“At a time when Sikhs were struggling against discrimination in the post-9/11 environment, she could have used her discretion as attorney general to expand equal opportunity for Sikhs and other religious minorities who wanted to serve as security officers in her state,” Jolly said.

Jolly, who at the time was working as the policy director for the Sikh Coalition, said while Harris had the authority to drop the case or promote changes to the policy, she “dug her heels in” on the issue, according to a Religion News Service report.

More than 700 people have so far signed the online petition which aims to gather 1,000 signatures.

“At a time when the Obama/Biden administration made historic efforts to allow observant Sikh Americans to serve in the U.S. armed forces, Senator Harris was defending a state policy that forced an American to choose between his faith and his livelihood,” it said.

“Instead of lecturing other presidential candidates on civil rights, Senator Harris must apologize to the Sikh community and pledge to protect religious freedom and equal opportunity for all Americans,” it added.

Even the Biden campaign has taken note of the potential liability of Senator Harris in being the Vice President.

As Attorney General of California, Kamala Harris had troubled history with criminal justice and civil rights

There are many sticking points in the career of Kamala Harris when she was the Attorney General of California as this article in The Appeal describes:

In a Democratic debate last year, when pressed for her record on her time as a prosecutor, Sen. Harris was evasive and her rival Representative Gabbard also weighed in:

A piece by Marie Claire further notes that Kamala Harris:

What is left out of most of these articles is the fact that while serving as the Attorney General of the United States Kamala Harris also also targeted Sikh Americans. As Religion News Service reports:

The Biden campaign has a certain number of Obama alumni who have come back in order to advise the Biden campaign and help it transition into the general election. Which includes Sikhs as well. Having Kamala Harris as the Vice President would not serve justice to the call that Sikhs continue to answer relentlessly in the service for America. Kamala Harris isn’t the one who should be chosen. 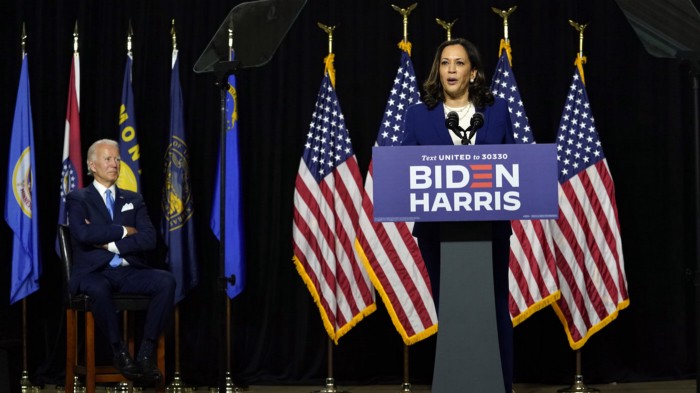 Now, admittedly, the Biden campaign faces tough decisions around who they should add or subtract to their list, given that there is so much baggage around almost every political figure.

OnAugust 11th, 2020 Joe Biden announced that he had come to a decision regarding who would be his running mate. That running mate is Senator Kamala Harris from California. While it is disappointing that the outcome we argue against in this blog post has come to fruition it has the silver lining that now we get to continue to continue to press Vice Presidential candidate Harris on issuing a formal apology (if she is remorseful in the first place) of discriminating against a Sikh man who wanted to keep his beard and turban while serving the state of California.

No one in America should be making the decision between getting paid and being able to practice their faith. As someone who has a half Asian heritage, Kamala Harris is indeed in a unique position to make herstory as the first black and asian woman to ascend to the Vice Presidency. It is also an opportunity for her state to go in a new direction in understanding who their future Senator will be and what standards they need to meet in order to represent the state in Washington D.C.

As we shift into general election, the hope is that Sikh American stories are amplified and we start taking up more space at the decision making table and fighting for our right to do things beyond grow food for the imperial empire and fight it’s warsbut not have a seat where the critical decisions are being made for Democracy.

Note: Above writeup was originally published on Medium.com under title “Kamala Harris and her history with Sikhs” by Navjot Kaur at source url. It is republished as above for the information of readers of the Sikh Siyasat News (SSN).