Killing Of Security Personnels By Maoists In Sukma Not A Human Rights Violation, Says CRPF

NewDelhi: As per the media reports in response to an RTI application by a human rights activist seeking the inquiry report into the Sukma attacks, the CRPF said that the killing of 25 personnel by Naxals on April 24 does not qualify as a “human rights violation”. 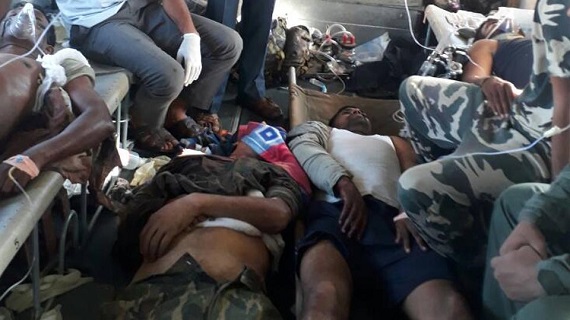 The injured CRPF jawans of the 74th battalion being shifted to a hospital in Raipur on Monday.(File Photo)

It seems that the main stream Indian media after all was beating their head against the wall as they made huge hue and cry about the human rights violations of those security personnels killed in the attack, following the attack on patrolling party of the CRPF in Sukma district of Chattisgarh stated by the Maoists on April 24th 2017. And can be termed as a mere strategy to manipulate public opinion against ongoing Naxal movement.

Media reports indicates that  at the time of filing the applicaton Venkatesh Nayak  said ”the massacre violated the human rights of those killed. Under the RTI Act, the CRPF is exempted from making disclosures unless any such information sought pertains to allegations of human rights violation and corruption “which may or may not be committed by the CRPF personnel”.

“In the instant matter, there appear to be no violations of Human Rights as well as facts of the case do not attract allegations of corruption. Moreover, your application does not make any reference to such allegations. Hence this department is not liable to provide any information in this regard to your under RTI Act-2005,” reads a quote from the statement given by CRP to an English vernacular.

In its argument over withholding any such information, the CRPF also said the report contains operational details due to which information cannot be shared.

According to Venkatesh Nayak’s  perception the Sukma attacks in April amounted to the violation of human rights of CRPF personnel by “non-State actors” and by denying this, the CRPF may be doing injustice to its own personnel, reports Indian Express (IE).