Kin Of 39 Missing In Iraq Asked To Undergo DNA Test

Jalandhar: After the Central Government failing to get a concrete clue on the fate of the 39 men missing in Iraq for three years, their families were today asked to undergo DNA tests, raising concerns.

The families, who said they had got messages through police stations and numberdars, were in a quandary over why the need was felt for such a test. 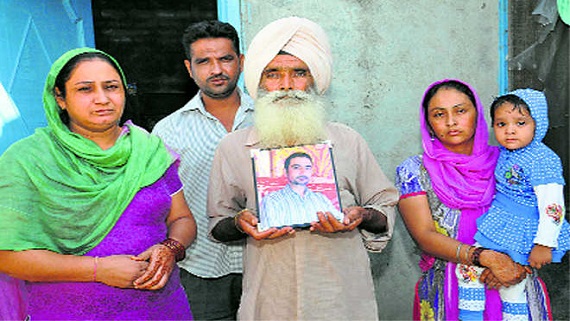 Gobinder Singh’s family in Murar village of Kapurthala, like that of 38 others, has been waiting for any news on his whereabouts. File

Kamaljit Kaur of Bath Kalan, whose husband was working in a construction company and was reportedly held captive — along with 38 others, mostly from Punjab — by Islamic State in Mosul in June 2014, said, “I was not at home, so the cops left a message. After this, a numberdar came saying DNA tests of my two sons are to be done”, reads a quote from a report published in an English vernacular.

Manjit Kaur of Rurka Kalan, whose husband Dawinder Singh too is missing in Iraq, said, “I got a call from Dhaleta police post to get DNA tests done of my three sons. We have not been given any update and are clueless over the reasons.”

Both the family members of the missing and Aam Adami Party’s (AAP) Member Parliament Bhagwant Mann has raised the issue with Minister of External Affairs Sushma Swaraj. She too at times assured of status about the missing youths but of no avail.

“There have been directions from the MHA to get the samples of children of missing Iraq men taken and sent to Delhi. I think it is just a routine exercise so the DNA tests can be immediately matched in the event of any information”, reads the statement of Deputy Commissioner Varinder K Sharma published in an English tabloid.

In Amritsar, too, families were asked to reach Government Medical College. Eight families did reach, but were asked to come on Monday as they did not have the kits for taking DNA samples, notes The Tribune (TT).