Ludhiana Arrests: Police Gets Remand of Two Till October 11

Ludhiana: The Ludhiana police was able to get police remand of two persons in relation to recent arrests. Duo were lodged in jail and were separately produced before the court on production warrants. The court of magistrate Devnoor Singh sent them to police remand till 11th October 2017. 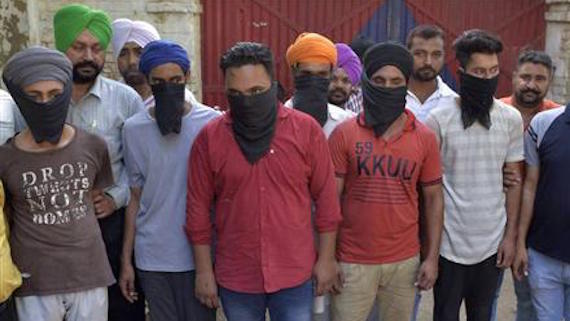 Seven persons were arrested by the Punjab police on Saturday (Sept. 30) [File Photo]

Advocate Jaspal Singh Manjhpur told the Sikh Siyasat News that one Parminder Singh S/o Ranjit Singh R/o Bathinda was ledged in Maximum Security Jail Nabha and the police produced him in relation to FIR No 271/2017 registered under the Arms Act and section 16, 17, 18, 19, 20 of the Unlawful Activities Prevention Act (UAPA) registered at police station Division No. 7 (Ludhiana).

He said that another youth named Amritpal Singh S/0 Inderveer Singh R/0 Majitha who was to judicial custody in recent Ludhiana arrests case few days back, was produced in the court in relation of another case registered at police station Division No. 7 (Ludhiana) under FIR No 265/2017under section 307 of the IPC and Arms Act.