“At least four activists involved with the Extrajudicial Execution Victim Families Association in Manipur say they have been harassed or attacked in the last few months by security force personnel or others,” said Arijit Sen, Programme Manager, Amnesty International India. “Manipur Chief Minister, N Biren Singh must ensure that state authorities protect the constitutional rights of these brave women and men fighting for truth and justice.”

In July 2017, the Supreme Court ordered the Central Bureau of Investigation to investigate over 90 alleged extrajudicial executions in Manipur (that took place in the period between 1979 to 2012) based on a writ petition filed by the Extrajudicial Victim Families Association (EEVFAM) and Human Rights Alert, an NGO. The investigation is ongoing. 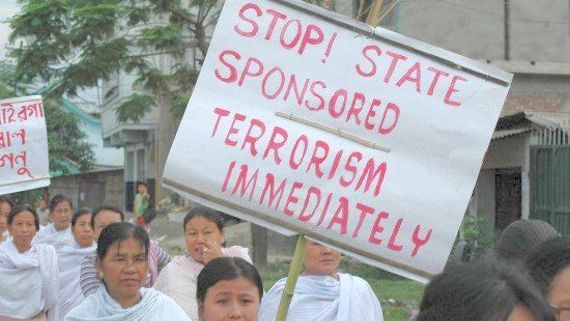 Protest over Fake Encounter Killings in Manipur, May 23 2009 [File Photo]

On the night of 26 February 2018, police and Army personnel entered the house of Ranjeeta Sadokpam, who works with Human Rights Alert, claiming they were looking for someone named “Somendro”. Sadokpam said that the personnel were accompanied by a masked man. The personnel, even after repeatedly being told that they were at the wrong address, interrogated her two brothers Dhiren and Ronen, and asked them to prove their identity. They then made all the family members sign a document whose contents they withheld.

Ranjeeta Sadokpam said, “It is strange that they came to our house in the middle of the night looking for the wrong person when they had all the relevant information about the neighborhood. This made me realize that this was related to my work.”

Human Rights Alert has submitted a complaint to the Director General of Police, Manipur. Babloo Loitongbam, Executive Director of the organization, said, “There is a pattern of attacks on those who are working with EEVFAM. It is an attempt to unnerve human rights defenders in Manipur.”

On 8 February 2018, Manoj Thockchom, who works with EEVFAM, was detained by the police for 15 hours without an arrest warrant, and questioned about allegedly being involved with armed groups. On 8 January 2018, police personnel went to the house of Sagolsem Menjor Singh, a human rights defender and member of EEVFAM, whose son was killed in an alleged extrajudicial execution in 2009. Menjor was not at home. His wife said that the police claimed they were going to arrest Menjor, but refused to provide a copy of the arrest warrant. Later, a public official confirmed there had been no arrest warrant issued against Menjor.

On 14 October 2017, Okram Nutankumar, another human rights defender and an active participant in EEVFAM’s activities, was fired at from outside his house. The following day, he filed a police complaint, but later discovered that the police had not registered a First Information Report.

On 2 January 2018, the Centre for Social Development, an organization which has been a vocal supporter of EEVFAM, had its foreign funding license suspended for allegedly working against the ‘public interest’.

“Harassment, intimidation and assaults cannot become the order of the day for human rights defenders in Manipur. These incidents raise concerns that that there is a renewed attempt to cripple human rights work in the state,” said Arijit Sen.