MANIPUR: Over 1000 call for an end to intimidation, harassment and attacks against Human Rights Defenders associated with EEVFAM

“The campaign assumes crucial importance now that the Supreme Court ordered CBI investigation is underway. The heat is being turned up against officials who have allegedly been involved in extrajudicial executions in Manipur. Due to this, we believe, HRDs are being harassed, attacked, threatened and intimidated”, said Renu Takhellambam, President, EEVFAM. 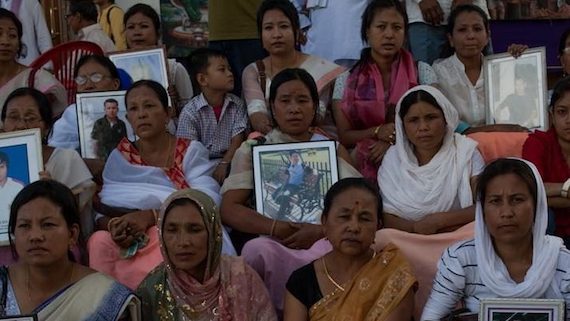 The petition launched on 11 June requests people to give a missed call to 08030456996 to show their support for HRDs from EEVFAM. The campaign has been conducted in collaboration with EEVFAM and Human Rights Alert (HRA), a local NGO.

“The BRAVE campaign has received much needed support from local groups since it was launched. Despite the rain and the ongoing flood alert, people have come out in large numbers. This outpouring of support for EEVFAM members who are seeking justice for the loss of their loved ones in alleged extrajudicial executions highlights the profound connect of the campaign with the people of Manipur. For years, violence has dominated the lives of the people of Manipur and the fact that they are standing by HRDs who are resisting rights violations signifies the spirit of this collaborative campaign. Together, we want to turn the spotlight on the shrinking space for civil liberties and ensure HRDs have a safe and enabling environment for their work”, said Arijit Sen, Programme Manager, Amnesty International India.

Over the last one week, Amnesty International India, EEVFAM and HRA have been spreading awareness and mobilising support at the community level for Human Rights Defenders under attack. Having conducted community-level meetings in Imphal East, Imphal West, Bishnupur and Thoubal districts, the campaign also received support from the local Meira Paibis. On 14 June, the local group held a historic torch march at Dhana Manjuri College in support of the BRAVE campaign and HRDs from EEVFAM.

On 16 June, over 80 women from the local Ima market formed a ‘human chain’ in the heart of the city, which stretched from the market to the pharmacy where the extrajudicial execution of Sanjit Meitei took place on 23 July 2009.

Salima Memcha, 38, lives in Thoubal, Manipur. Her husband was killed in an alleged extrajudicial execution by security forces in 2010. For years, Salima has been supporting her family whilst seeking justice for her husband.

Salima is just one of hundreds of people in Manipur who have lost family members in alleged extrajudicial executions. Together, these families have formed a collective – the Extrajudicial Execution Victim Families Association Manipur (EEVFAM).

In an attempt to achieve justice, EEVFAM members and activists documented over 1500 instances of alleged extrajudicial executions by security forces in Manipur since 1978. In 2012, along with Human Rights Alert, an NGO, they approached the Supreme Court, and filed a writ petition seeking an investigation into the cases they had documented.

In July 2017, the Supreme Court ordered the Central Bureau of Investigation (CBI) to investigate over 90 alleged extrajudicial executions in Manipur. This investigation is ongoing.

However, these brave Human Rights Defenders are now increasingly under attack. At 5:30 am on 7 April 2018, paramilitary and state police personnel vandalised Salima’s house. They also threatened her and warned her that they were keeping a close eye on her. This was the same day that Salima was due to give a statement to the Criminal Investigation Department, on her husband’s case.

Salima is not the only member of EEVFAM who has been threatened. On 8 January 2018, police personnel visited Sagolsem Menjor Singh’s house, when he was not home. They claimed they were going to arrest him, but refused to provide a copy of the arrest warrant. Later, a public official confirmed that there was, in fact, no arrest warrant against him. Menjor, who has spent years seeking justice for the loss of his son in an alleged extrajudicial execution in 2009, says this is not the first time that security personnel had come to intimidate him.

Two other activists Ranjeeta Sadokpam and Okram Nutankumar, who are closely associated with EEVFAM say they have also been intimidated, harassed or attacked by security force personnel in the past year. EEVFAM members strongly believe that they are being targeted in an effort to silence them while the CBI investigation is currently underway.

Some of these human rights defenders have suffered deep personal tragedies, and now they face intimidation and harassment, simply for seeking justice. Yet, they refuse to give up. They have shown bravery in the face of adversity.