The meeting was jointly organised by the All Party Parliamentary Group (APPG) for British Sikhs, Sikh Federation (UK) and the Sikh Network. According to the organisers there was diverse representation and the meeting. They said that the meet was insightful and constructive in developing consensus on major challenges faced by the community. 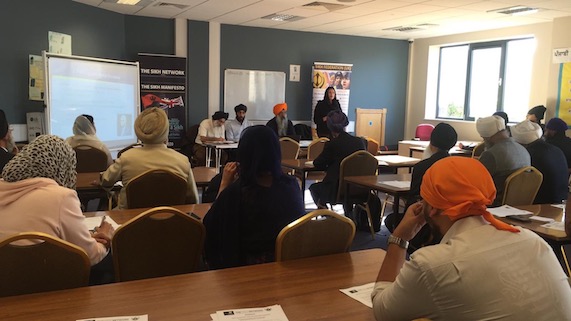 A view of the meet

Preet Kaur Gill MP, the Chair of the APPG shared with the community for the first time at the meeting the outcome of her one-to-one meeting with Sajid Javid, the Home Secretary that took place on Tuesday 16 October.

According to Preet Kaur Gill MP,

On the Hate Crime Action Plan, British Home Secretary said he was open to a Cross-Government Working Group to Tackle Anti-Sikh Hatred.

On the Offensive Weapons Bill he said he had spoken with Victoria Atkins, the Minister responsible and they would work with the APPG and make the amendments in the House of Lords as they do not want to introduce any restrictions on larger Kirpans.

On Immigration enforcement officers targeting Gurdwaras to gather intelligence he was challenged and after some reluctance asked his staff to provide the information requested by Preet relating to the extent to which they are targeting places of worship for different faiths, clarification on the Sikh organisation that had sanctioned Gurdwaras being targeted and the propriety and accountability of £400k of grants to this organisation.

On police raids on the homes of five Sikh activists at the request of the Indian authorities he confirmed he was made aware of the raids. He suggested Matt Ward, the head of the West Police Counter Terrorism Unit, could be asked to clarify about sharing of information with foreign intelligence agencies.

In a written statement Bhai Amrik Singh, the Chair of the Sikh Federation (UK) said:

“Preet and the APPG are doing an excellent job in championing issues for the Sikh community and challenging the most senior Ministers in government.”

“Sajid Javid provided a very positive response on the Offensive Weapons Bill and the Code of Practice on the five Kakaars and Sikh Turban.”

“He also realised the Home Office was vulnerable to criticism in several areas and provided a useful steer on other issues.”