San Francisco, CA: Community leaders from various diaspora groups of Indian minorities will gather at the Indian Consulate in San Francisco for a protest at noon on Friday. Protests have already erupted throughout India over the circumstances around the suicide of Dalit student leader Rohith Vemula of the University of Hyderabad. As a second-year PhD student, Rohith studied life science and advocated for the equal rights of low-caste minorities with the Ambedkar Student Association. In an attempt to stifle the group’s political speech, the University revoked Rohith’s student stipend, began to investigate the campus organization, and proceeded to suspend Rohith and four other students for their political views. On Sunday, January 17th, the pressure from the University proved too much and Rohith took his own life.

“Rohith’s death is the consequence of the caste-based policies that flourish in Modi’s Bharatiya Janata Party (BJP) government,” said Arvin Valmuci of the Organization for Minorities of India. “As a people, as a community, and as society, we need to do better to protect the rights of the underprivileged and oppressed people of South Asia.”

Formerly known as the “untouchables,” Dalits are the outcastes in the Hindu caste system. Despite a Constitutional ban on the practice of caste in 1950, the social structure is still widely embraced throughout India, particularly in more economically underdeveloped regions which has led to widespread discrimination and violence against the Dalits.

“Rohith’s suicide continues to demonstrate how casteism dominates India’s social institutions.The impact of caste discrimination on the Dalit community is not terribly different than the American Jim Crow laws,” says Bhajan Singh, founding director for Organization for Minorities of India. “It is evident from the circumstances that government-driven caste discrimination created the conditions for Rohith’s depression and suicide.”

First-hand testimonies from community leaders will highlight the challenges that minorities continue to face in India today. 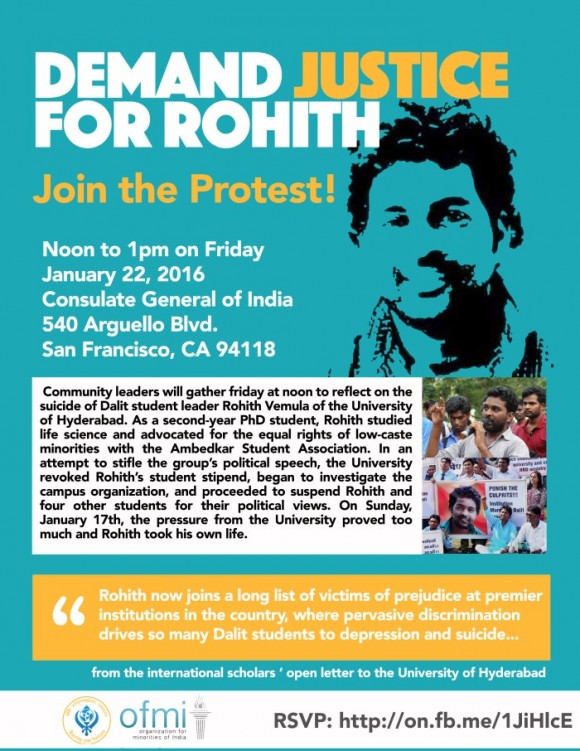 Protest against Indian Consulate in CA over #RohithVemulaSuicide