“Guru Nanak Sahib’s 550th Parkash Gurpurab is going to be very big occasion for Sikhs and others. If there is no official proposal from Pakistan than Government of India can initiate a proposal to Pakistan. Majority of the Sikhs lives in India, and they are eager to visit Gurdwara Kartarpur Sahib in Pakistan and when it’s interest of those residing in India, then how Pakistan would send proposal? Its not Pakistan’s citizens who are not asking to visit India. Sikhs have been making this demand to it’s own Govt. for last so many decades, and Punjab Cabinet Minister Navjot Singh has written to external minister Sushma Swaraj recently”, journalist turned politician Jarnail Singh said. 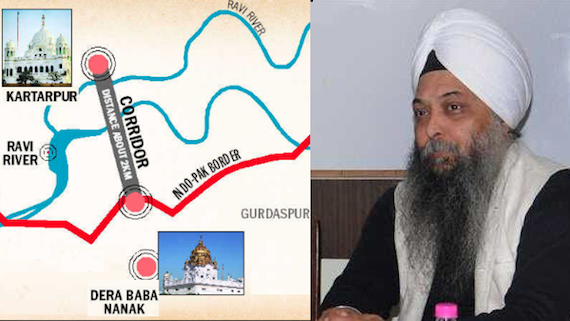 S. Jarnail Singh said that [n]ow, Govt. of India must understand the sensitivity of this issue and respond positively. This is not dispute of Siachin or Kashmir but a simple issue of religious sentiments.

“Sikhs paid heavy price for division of India and lost historical shrines like Nankana sahib (Janam Asthan of Guru Nanak Ji), Panja Sahib, Dera Sahib and Kartarpur sahib etc. For last 71 yrs. Sikhs are praying to visit these shrines without restrictions and hindrance. This particular Gurdwara Kartarpur Sahib is just 4.5 kilometers from border and Sikh sangat regularly visit border to watch this place with binoculars and heavy heart”, he added.

“When there is an opportunity to open this corridor, may be for some time Govt, of India should play positive role otherwise they would become villain in the eyes of Sikhs easily, may be what Pakistan wants. Instead of getting into this trap Govt. of India should be seen more pro than Pakistan” said he.

AAP leader said that Sikhs are feeling when Narendra Modi and Rahul Gandhi are busy in visiting Temples and mosques for political advantages they are ignoring Sikhs sentiments as they are a tiny minority community in India. This insensitive approach would increase the sense of not belonging in Sikhs which can be proved dangerous, he added.