Jharkhand, India: Indian Prime Minister Narendra Modi has asked Naxalite/ Maoist groups to drop guns and participate in “nation-building” project of the Indian state. Narendra Modi who is often blamed by various human rights groups for triggering anti-Muslim violence in 2002 reportedly stressed that ‘violence had no place in the country of Gautam Buddha and Mahatma Gandhi’.

While addressing an election meeting at Chandua in Latehar district of Jharkhand, the Indian Prime Minister said “[t]here is no place for violence, which does no good to anyone. I appeal to those who have picked up the gun to shun it and pick up the plough. This is your country and work shoulder to shoulder in developing it”. Narendra Modi urged the people to preserve democracy without letting anything to stain it. 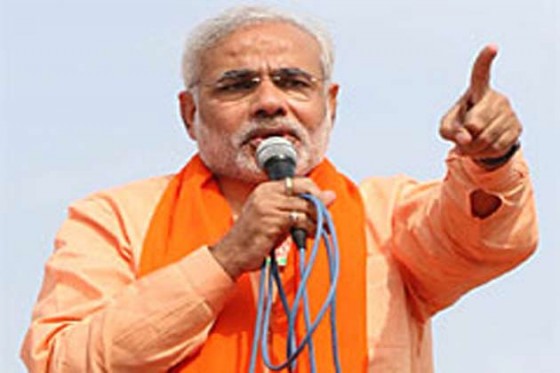 Referring to the state, he said ,”If the Almighty has given any state abundance of wealth then it is Jharkhand” and lamented how it was being left poor by the “sin” committed by previous regimes.

The Centre, he said, was determined to take Jharkhand to new heights if the BJP was voted to power in the assembly elections. Ajsu president and former deputy chief minister Sudesh Mahto was present on the dais along with Modi. His party is contesting the elections in alliance with the BJP.

The first phase of polling in Jharkhand is scheduled on November 25 and the rest of the four phases will be held till December 20. Counting of votes will take place on December 23.

It is notable that the Corporate sections have big interests in areas under Naxal/ Maoist infualnce and these areas are rich in natural resources. The BJP government has already formed a new policy to ‘tackle’ the ‘Naxal problem’.