Ahmedabad: In the trial of the Naroda Gam massacre case of the 2002 post-Godhra riots, the Supreme Court appointed-Special Investigation Team (SIT) on August 3 argued before a special court that the deposition of BJP president Amit Shah “should be discarded” as it was done merely to “support” key accused former BJP minister Maya Kodnani.

Special Public Prosecutor Gaurang Vyas, while reading out the statement recorded by Shah in the court in September 2017, said that “Amit Shah recorded the statement 15 years after the incident which is not relevant now. It was done only to support Maya Kodnani as both were MLAs back then.” 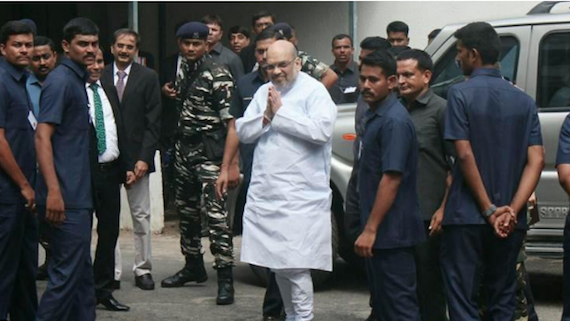 Vyas argued that “Amit Shah’s presence at Sola Civil hospital is also doubtful as despite being an MLA (back in 2002) nobody, even the accused like Babu Bajrangi, Jaideep Patel ever mentioned his presence.”

Sola civil hospital is the place where the bodies of karsewaks had been brought from Godhra.

In her defence, Maya Kodnani has said that she was at this hospital with Amit Shah when riots broke out in Naroda Gam area on February 28, 2002. She had got summons issued to Shah for his deposition. Shah appeared in court and recorded his statement that he saw Maya Kodnani.

Shah had said that he saw Kodnani first at Vidhan Sabha at 8.30 am. From Vidhan Sabha he left for Sola civil hospital where angry relatives of the Godhra train carnage had gathered to collect the bodies.

In his statement, Shah had said: “Since slogans were being shouted against the incident and there was chaos, a police team escorted me and Mayaben out of the hospital and took us to a police jeep since my vehicle was parked a little far. I can’t say exactly but it was around 11 am to 11.15 am. I was dropped near Gota chowkdi where I got into my own vehicle.”

Last year, the accused including Kodnani had brought more than 50 persons in their defence for the first time.

The SIT will continue examining the deposition of two more defence witnesses of Kodnani. Meanwhile, lawyer Shamshad Pathan sought permission from the court for arguing on behalf of the victims. The court asked him to file an application. It will be heard on Friday.

In the Naroda Gam case, 82 accused are facing trial including former BJP minister Maya Kodnani and Babu Bajrangi who are accused of killing 11 Muslims.

In Naroda Gam, the SIT chargesheet states, Kodnani was seen by about 14 eyewitnesses between 9 am and 10.30 am on February 28, 2002, where she briefly addressed the mob, allegedly asking them to kill Muslims. Apart from oral evidence, the SIT also relied on the electronic evidence in the form of mobile call detail records (CDRs) that showed her presence in the locality.

Maya Kodnani maintains she never went to the spot. She has been booked for conspiracy, murder, illegal assembly, inciting communal hatred among other charges.

According to the SIT, Kodnani attended the Gujarat Assembly proceedings which was suspended after paying condolences to the victims of the train burning incident. She left the Assembly around 8.40 am and reached Naroda Gam and then proceeded to Naroda Patiya. The SIT claims that her arrival there was part of the same conspiracy which led to the killing of Muslims in Naroda Patiya too. Since there were different set of mobs, two separate FIRs were filed by Naroda police.

Maya Kodnani was acquitted in the Naroda Patiya massacre by the Gujarat High Court in April this year.