Washington DC: The Sikh Coalition a USA based civil rights group here on Monday reminded the American public that newly published FBI hate crime statistics are based on a flawed reporting system.

In 2016, the FBI documented 6,121 hate crimes in the United States, including seven hate crimes against Sikhs. Although the overall figure represents a nearly five percent increase over the previous year, it is based on voluntary reports by law enforcement agencies. Many of these agencies do not bother to report hate crimes to the FBI. 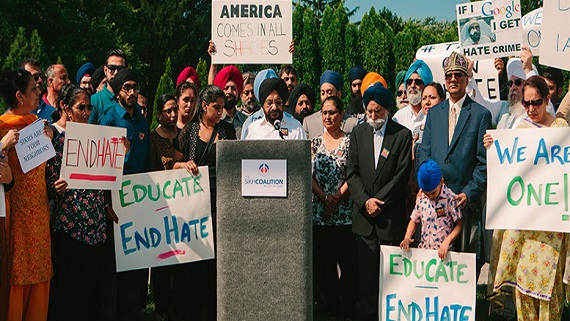 On the other hand, a June 2017 study by the Bureau of Justice Statistics estimated that there are 250,000 hate crime victimisations in the U.S. each year.

“FBI hate crime data represents the tip of the iceberg and understates the magnitude of hate crime in America,” said Sim J. Singh, the Sikh Coalition’s Advocacy Manager. “The only way to bridge the data gap is for law enforcement agencies to adopt mandatory hate crime reporting.”

The Sikh civil rights group estimates that Sikhs remain hundreds of times more likely to experience hate crimes than the average American. In 2016, the Sikh Coalition received legal intakes from 15 Sikhs who believed they were subjected to hate incidents. Since the start of 2017, the Sikh Coalition has received 13 similar intakes.

“If law enforcement agencies fail to document the true extent of hate crimes against our communities, our nation will have a hard time mobilizing the political will and resources necessary to prevent and combat the problem,” Sim J Singh said.