How the new RBI bank-notes extend Hindi-Hindustani imperialism? Have a look at the 500 Taka note. What is new? 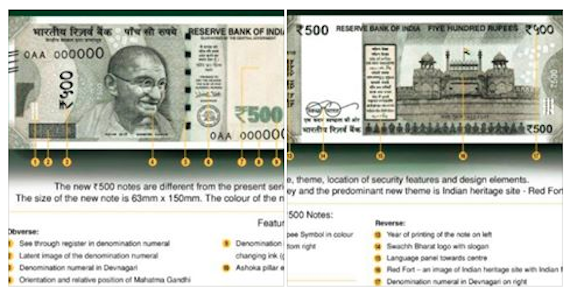 1. Now there are numerals that Hindi people can read. Only Hindi people need to read the numbers in their own script apparently. Others cant do it in scripts of their mother tongue.

2. When the new Taka sign came along, it also imbibed a letter from the alphabet of the Hindis. The word starts with ‘R’. In Bangla, the letter is ‘T’. So, its what Hindis speak which is more important.

3. Some Hindi slogan with glasses have been added.

4. The amount of real-estate on the bank-note given to Hindi has gone up. The relative space and size of their Hindi things vis-a-vis our mother tongues reflects exactly what Delhi thinks of the rest of us vis-a-vis Hindi. Let us unite to make sure Delhi knows what we think of them.

5. There is a picture of the Red Fort – a sign of Delhi’s pre-British imperialism, signifying the power of imperial invaders who attacked the countries of Bengalis, Marathis, Axomiya, Odiyas and many others. Our ancestors resisted such invasions but Delhi won by brute power. Delhi ruled by posting Hindi/Urdu speaking military people in our homelands. What does the Government of India want to remind us by putting this picture on the bank note?

6. There are other scripts of recognised languages like Meiteilon and Santali which have their own scripts. This was an opportunity to include them. They haven’t been.