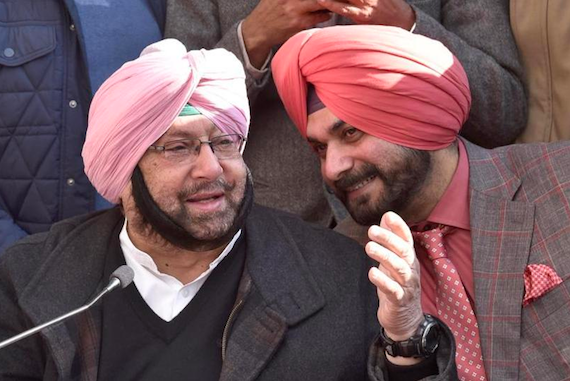 An overwhelmed Captain Amarinder on Saturday termed the massive and decisive Congress victory in Punjab as a collective feat of the people of the state, as well as the party high command and its workers, thanking them all for giving a clear mandate in the just concluded Assembly elections.

Addressing mediapersons at this residence here after the poll results, Captain Amrarinder said he was grateful to AICC president Sonia Gandhi and vice president Rahul Gandhi, and to every other member of the Congress family who had contributed to the exceptional electoral performance of the party. He also lauded the role played by the IPAC team in shaping the resounding victory for the party.

Speaking to the media, which had been waiting for the final moment since the early hours of the morning, Captain Amarinder announced that he would be meeting Rahul Gandhi soon to submit his recommendations on cabinet formation. In response to a question, he said the issue of deputy chief minister would also be decided by the party vice president.

Gracefully accepting the sweeping mandate of the people on his 75th birthday, Captain Amarinder, who is all set to don the Punjab chief ministerial cap for the second time, promised that his government would take more than 100 critical decisions, with no financial implications, in its first cabinet meeting. He reiterated his poll promise of wiping out the drug menace in four weeks, while bringing to book every single person found guilty of perpetuating the problem and destroying the lives of tens of thousands of Punjab youth.

Describing the poll outcome as a mandate for stability and progress, as well as good governance, the Punjab Congress president listed education and health as two areas of immediate concern for his government. Responding to questions, Captain Amarinder said he was committed to the nine-point agenda (nau nukte) contained in the Congress poll manifesto and would initiate its execution without delay.

Asked about the factors that contributed to the Congress win and the unexpected failure of the Aam Aadmi Party (AAP) to match the projections of the majority of the exit polls, Captain Amarinder said that he had always maintained that the voters of Punjab were very sensible and had seen through the AAP farce. The AAP bubble had burst with their outright rejection by the Punjab voters, he said, adding that the Maur blast, coupled with the alleged AAP extremist links, had also worked against Arvind Kejriwal’s party.

The issue of the Dera support further led to a counter reaction from the people and worked in the favour of the Congress, said Captain Amarinder, adding that the Punjab electorate had pitched their might in favour of the Congress as the only party with the experience and maturity needed to provide the state with a stable and progressive dispensation.

In response to a question, Captain Amarinder expressed the hope that his government would receive the support of the Narendra Modi led central government in taking forward the development agenda for Punjab.

The Punjab Pradesh Congress Committee (PPCC) president, who tracked the counting and the results of the assembly polls here this morning along with his few close aides and family members, joined the party workers in celebrating the monumental victory before leaving for his constituency and home town of Patiala to collect his MLA certificate and personally thank the voters for the faith they had reposed in him.