Chandigarh: As Dal Khalsa completes its 40-year struggle for Sikh sovereignty, the organisation held a conference in the city where it was launched on 13 August 1978.

Observing its Foundation day, amidst party cadres and pro-freedom stalwarts from Punjab, at an gathering here today, Dal Khalsa announced the continuation of the struggle for Sikh sovereignty to the formation of a secular and liberal Sikh state, through peaceful and democratic means. The organization observed Aug 13 as Azaadi Sankalp Divas. 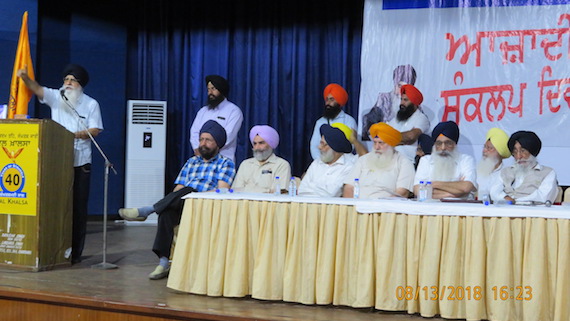 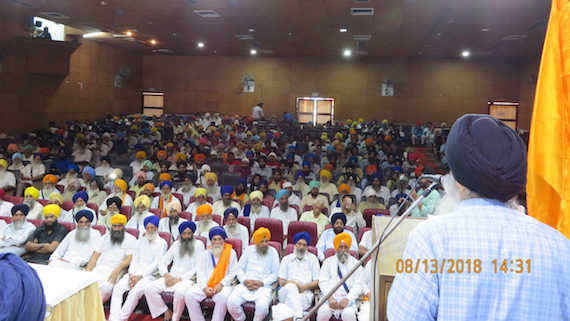 Pro-freedom Kashmiri leader Syed Ali Shah Geelani also sent his message for this event. Commending the work of the Dal Khalsa, Hurriyat Conference leader said: “My dear partners in freedom struggle, the minorities, in the vast ocean of majority populace of India have been subjected to the worst treatment. He called the Sikhs as the common sufferers and victims of oppression.” He further said, “My heart is with you, but as you know that I have been caged and confined to my house.” In his message he mentioned that “Kashmiris are the victims of state terrorism by Indian-occupying forces.”

Dal Khalsa’s founding president, Bhai Gajinder Singh in his message has said, “I pin my hope that new team of Dal Khalsa will take the movement forward and ensure that Sikhs are a free people.”

Also, Sikh Youth of America President Gurinderjit Singh Manna deeply appreciated the continued efforts of Dal Khalsa who despite all odds are working for creation of a sovereign Sikh state in the homeland which is exceptional as compared to those who are campaigning in foreign shores.

At the function, Dal Khalsa honoured Harinder Kaur Malhi for moving the first “genocide” resolution in the Ontario state assembly, which award would be sent to her. The gathering also acknowledged contribution of Prof. Jagmohan Singh in the drafting of the UN Memorandum seeking Sikh sovereignty through the right to self-determination, to the then Secretary General of the United Nations on behalf of the Sikh nation, in 1992, during his visit to New Delhi.

The gathering began with paying tributes to Sikh martyrs, beginning with Bhai Fauja Singh, Sant Jarnail Singh Bhindranwale and Bhai Dilawar Singh and many others.

The meet acknowledged the contribution of political prisoners Jagtar Singh Hawara, Jagtar Singh Tara, Balwant Singh Rajoana and others and sought their release.

Dal Khalsa president Harpal Singh Cheema said that we will launch a new phase of consistent democratic engagement with the government of India and the United Nations, urging them to set up a mechanism to allow the people of Punjab to exercise the right to self determination.

He thanked all leaders and cadres and reiterated that it was time to renew and reorient our struggle to achieve our goal of independence for Punjab.

Setting the tone at the conference, party spokesperson Kanwarpal Singh in a fiery and hard-hitting speech declared that the days of the Indian state machinations are history. He said, “We have revived our movement on political lines in 1998 for the right to self-determination and through it, to rekindle the spirit of freedom of the Sikhs. We launched our youth wing, the Sikh Youth of Punjab with the clear objective of rejuvenating the Khalsa and passing on the buck to the next generation.”

Senior Dal Khalsa leader Harcharanjit Singh Dhami making a direct reference to the London Declaration held yesterday said, “Our doubts regarding the feasibility and possibility of the referendum remain. Sikhs for Justice and its leader has not offered anything new in the London Declaration, except fixing the time of November 2020. Unless the misgivings are addressed 2020 will be a fiasco and will hurt the freedom movement of the Sikhs.” As it has come about, the SFJ call is nothing but an opinion poll whose results the organizers propose to take to the United Nations. Sadly, at the Trafalgar Square meet, absence of any Sikh activist from homeland Punjab showing a clear disconnect between Punjab and the body which claims to campaign for freedom of Punjab.

Speaking on the occasion, human rights activist and editor of The World Sikh News, Jagmohan Singh said, “Referendums don’t happen in thin air. They follow either a determined armed resistance struggle in the homeland to protect genuine and legitimate rights of a people through UN intervention or where there are mature democracies like UK and Canada which allow full play of democratic self-determination to those who desire.”